Cathedral and cloister of Monreale

One of the world’s largest and most interesting mosaic covered surfaces can be admired in the Cathedral of Monreale, a city located near Palermo in Sicily. Financed and created by the Norman-Sicilian king William II, called “Il Buono” (the Good), the artistic area that we are about to visit leads us into cultural and religious worlds that may even help us to understand our twenty-first century although they are nine centuries old.

William the Good, King of Sicily, built the Cathedral (S. Maria la Nuova) in a short time between 1174 and 1176. It is said that it was after he had dreamed that the Virgin revealed the place where a rich treasure was buried and that he would have to use it for a pious purpose. More likely, William was driven by the desire not to be outdone by his grandfather Ruggero (Roger), founder of the Cathedral of Cefalu, St. John of the Hermits and of the Palatine Chapel in Palermo. The great church would be well served to perpetuate his name forever.

For the design of the church Islamic architects related to fatimid style art were called upon. They transferred and adapted to the Christian artefact modes of expression and spatial solutions typical of palatial architecture of their country. Despite the not always happy additions and renovations, the cathedral has been passed to us today with its splendour substantially intact.

The façade is decorated with a motif of blind arches, now partially hidden by a portico, built in the eighteenth century, under which there is a large portal with bronze doors of 1186 made by Bonanno Pisano. Along the left side there is another long portico, sixteenth century work of Gian Domenico and Fazio Gagini, and finally there are three big apses, still intact and magnificent in their decoration in limestone and lavastone. The interior of the cathedral still has the appearance it had in the twelfth century (apart from the wooden ceiling, which was rebuilt after a fire in 1811). It has a basilica-type layout with a large surface area: 102 m long by 40 wide. The walls are almost entirely covered with gilded mosaics totalling 6,340 sqm. The general level of these decorations, both with respect to the design and execution, is surprisingly high.

The execution of the mosaics was entrusted to Byzantine workers and the iconography is typically Greek. However, the relaxed attitudes of the characters, their softly draped garments, the pace of the movements, show a clear evolution in style from that of the Palatine Chapel and the Martorana, a typically Italian evolution. At the end of the twelfth century, Italian artists were, in fact, leading the way in iconographic art. The mosaic cycle carries out the concept of the triumph of Christianity in three different phases, showing: events prior to the incarnation (Old Testament); episodes from the life of Jesus (Gospel); events subsequent to the death of Christ and the life of the Apostles (Gospel and Acts of the Apostles). The whole thing is dominated by a gigantic Christ Pantocrator (his right hand only is two metres long) in the main apse, which represents the synthesis and purpose of the whole complex representation.

The Benedictine cloister
The cloister, also dating from the time of William II, was part of a Benedictine abbey adjacent to the cathedral. It is a square area of 47 x 47 m, the layout of which undoubtedly belongs to the Christian area, but its general tone refers to the spirit and atmosphere of Muslim courtyards with porticoes. The little arcades delimiting the rich little garden are supported by 228 columns combined, all richly decorated and with capitals inlaid with plant, animal and fictional motifs.

Of particular interest is the illustrious capital on the west aisle, where William II is portrayed offering the cathedral to the Virgin Mary. In the south corner, in a small square enclosure, there is a delightful fountain, whose crystalline water flows from a little inlaid column. 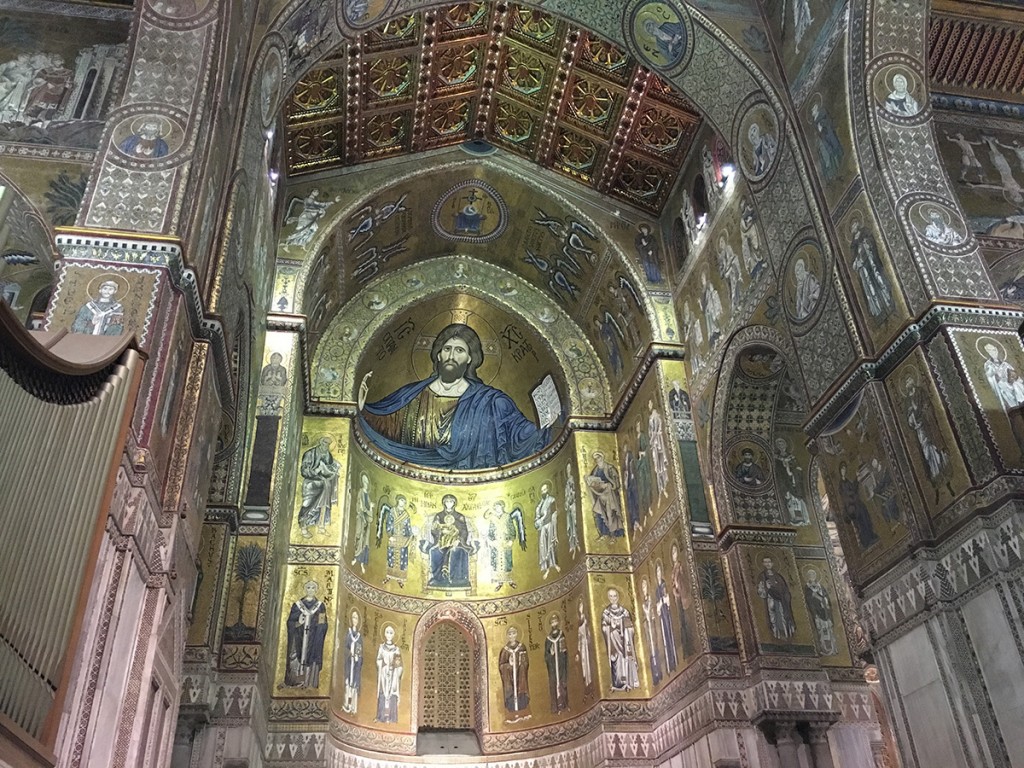 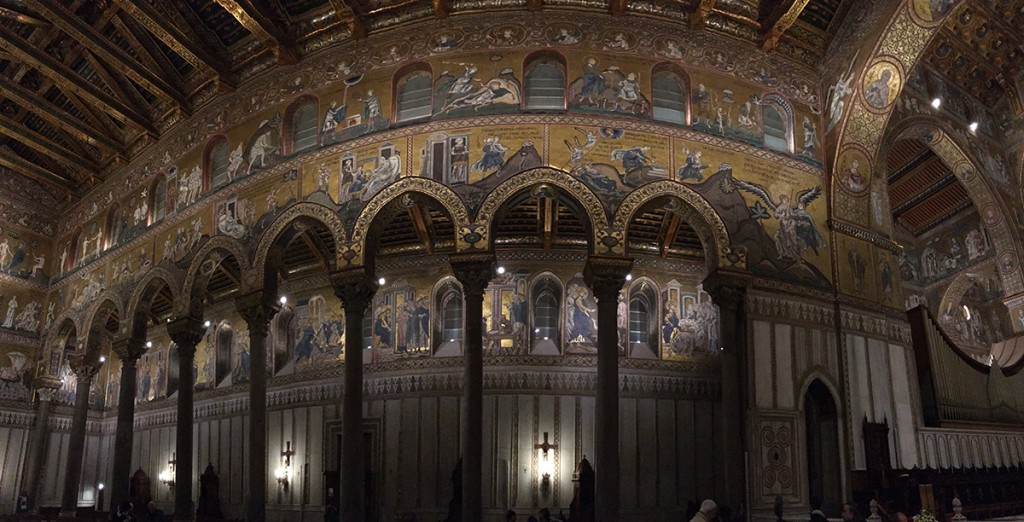 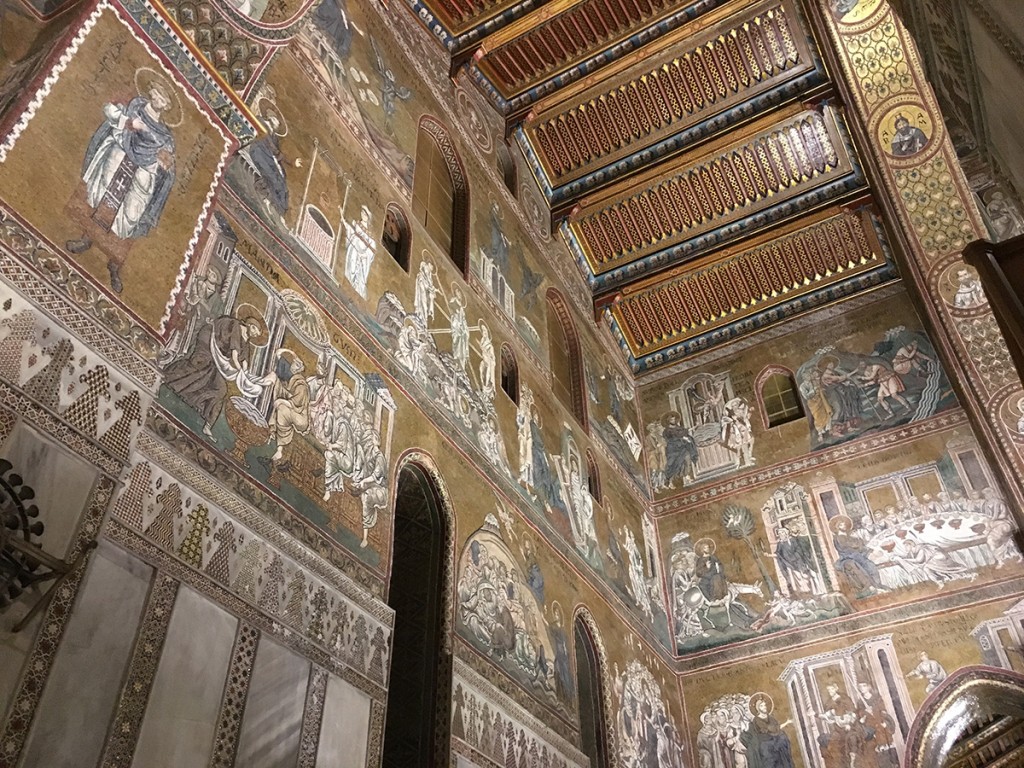 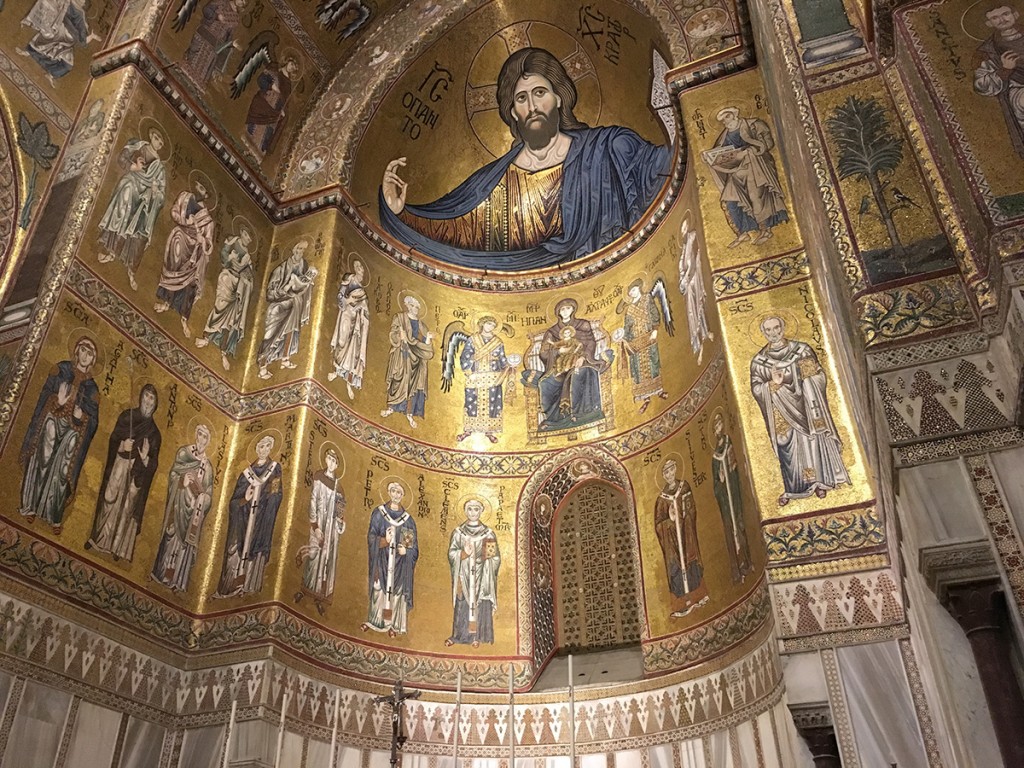 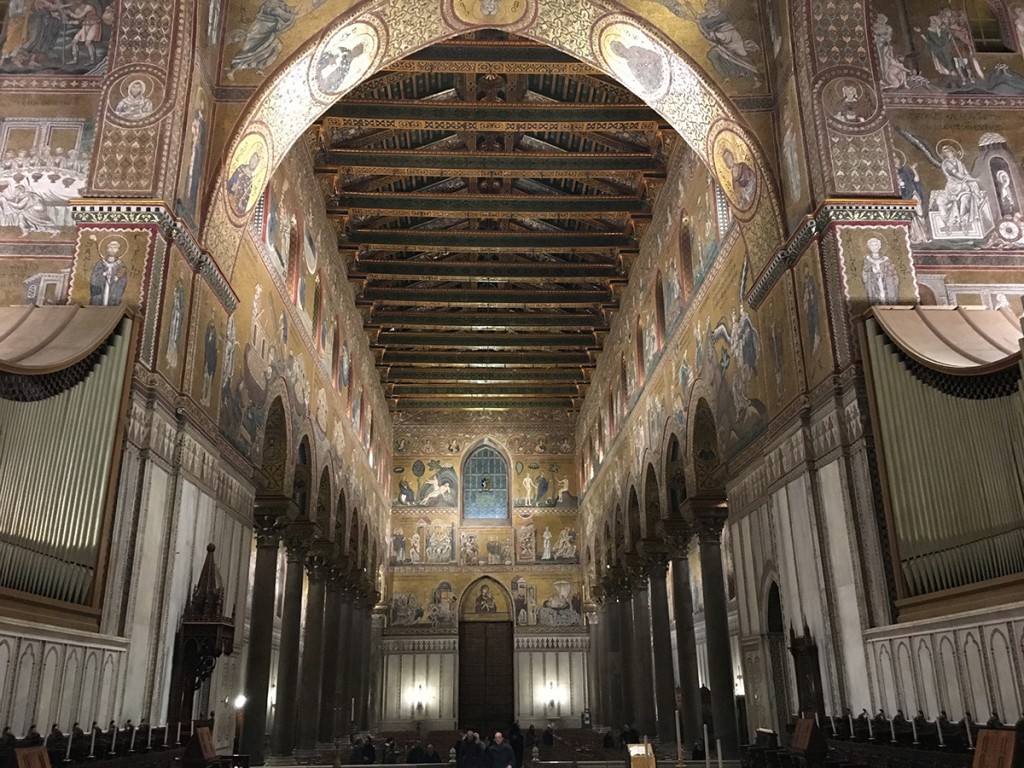 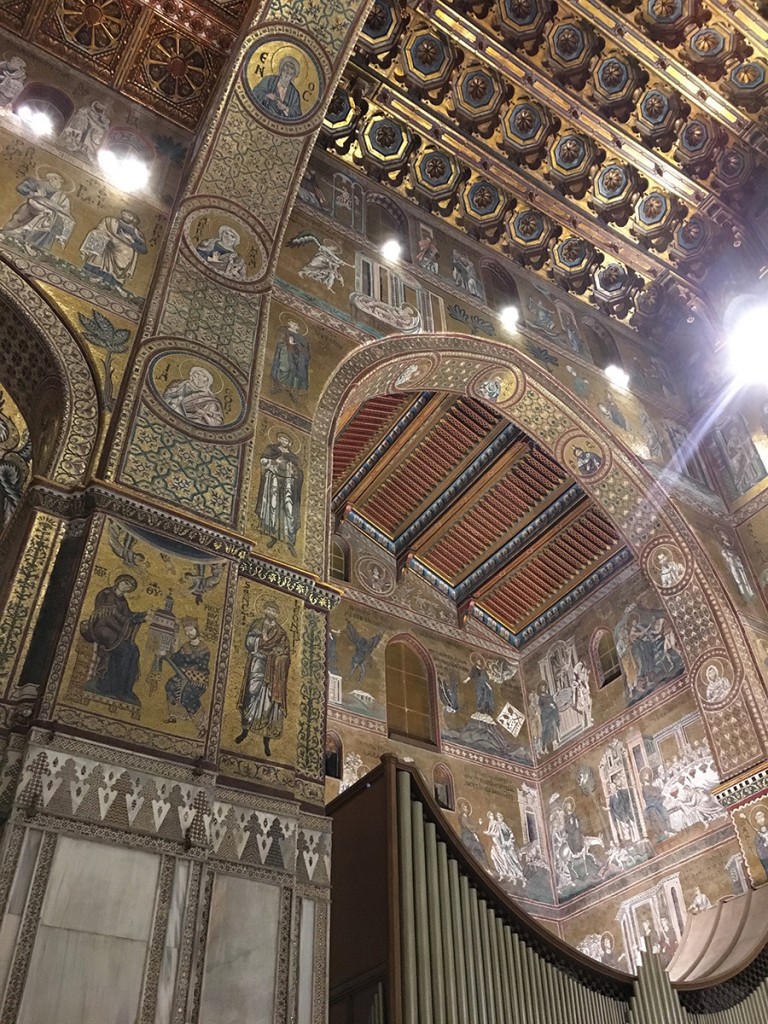 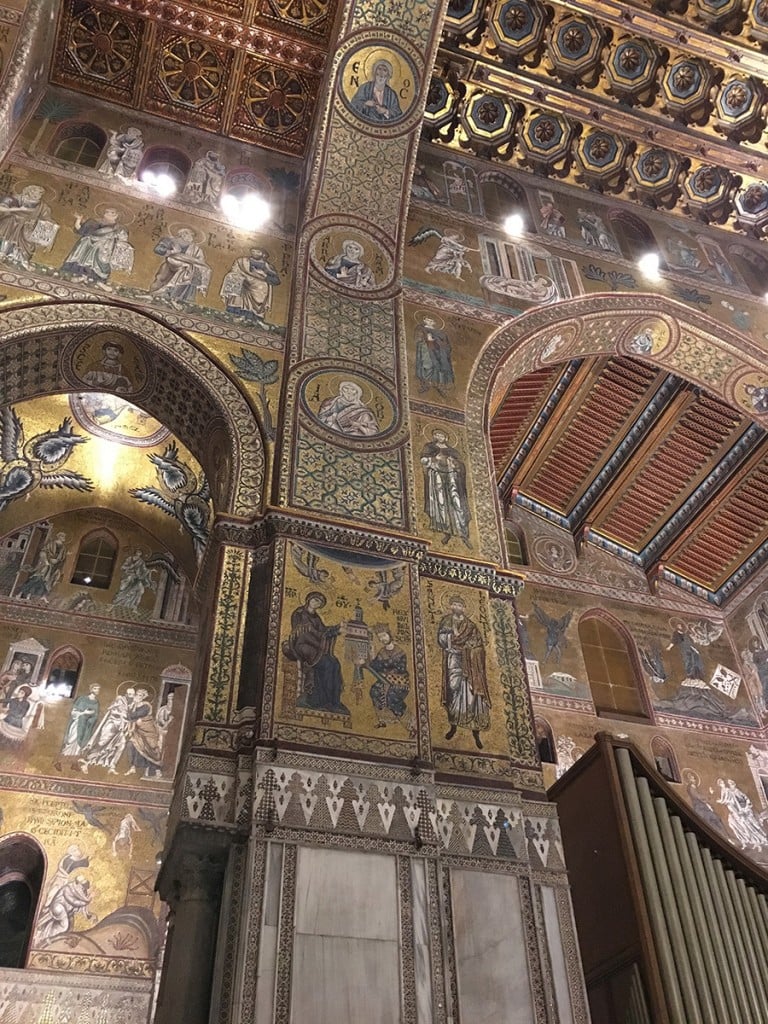 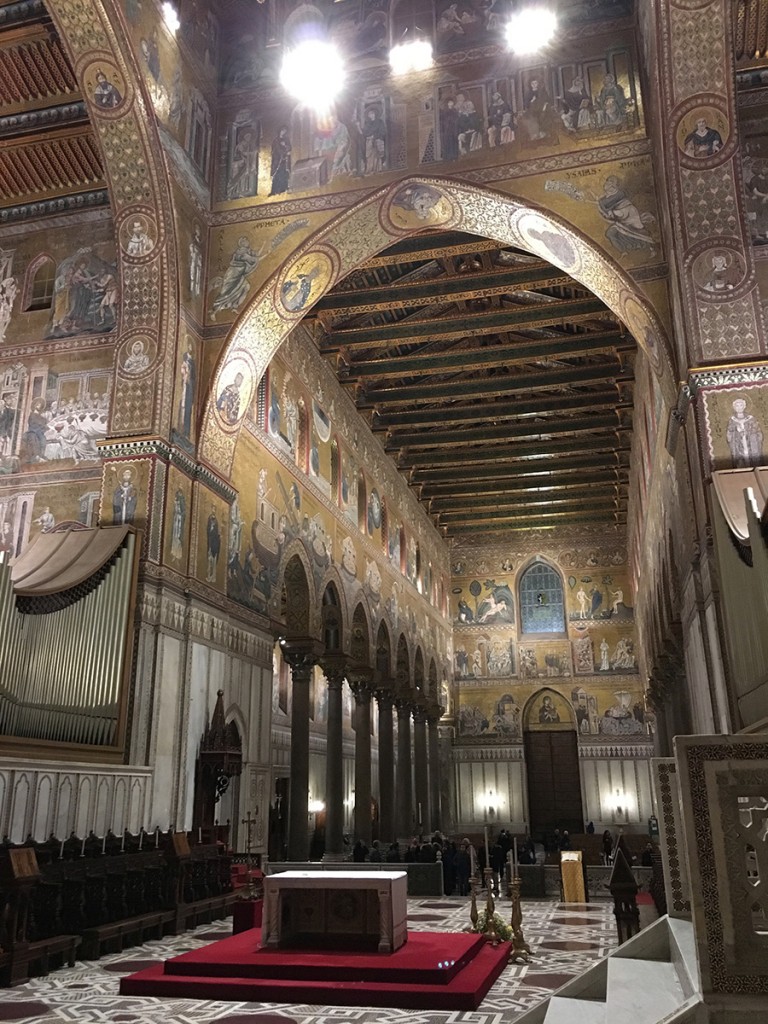 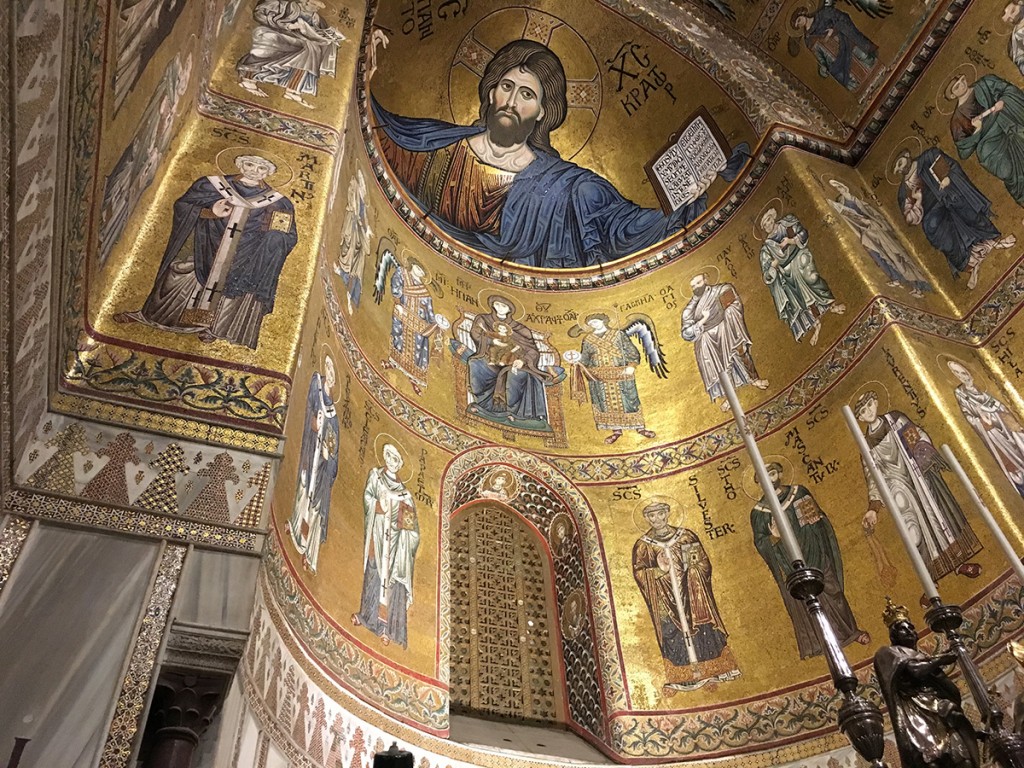