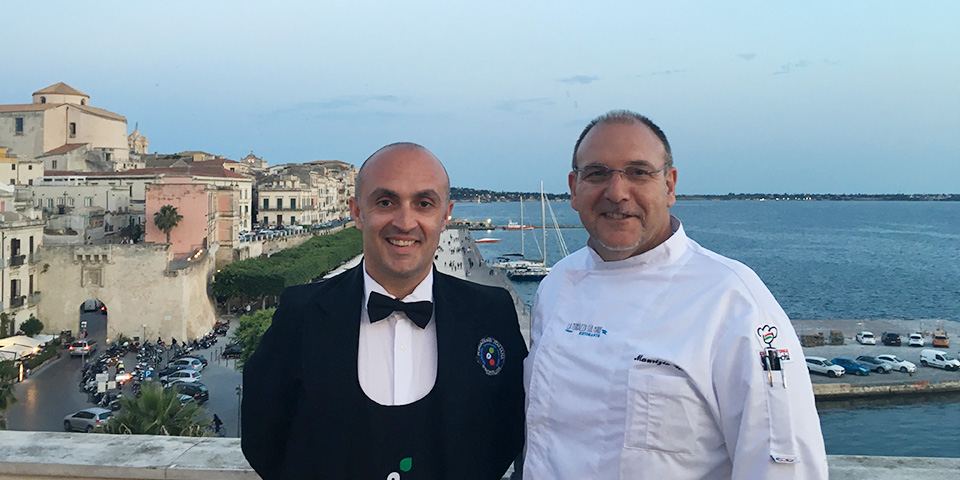 I return a year later to La Terrazza al Mare of the Grand Hotel di Ortigia of the city of Siracusa and my curiosity literally devours me. During my previous visit the gourmet restaurant on the top floor had pleased me a great deal for a whole series of reasons: the cuisine, passionate but measured of Maurizio Urso; the fine raw materials utilized; the service, excellent to say the least and of rare competence directed by maître d’hotel  Antonio Mancarella; the inspired wine list of Marco Campisi, one not  guided by casual choices; and, last but not least, the terrace overlooking Ortigia, one to fully experience with its panoramic view over the pleasure port, the golf course, and the Foro Vittorio Emanuele II. Let tell it like it is, a hotel-restaurant of this sort is something rare, particularly if one considers that this is a spot with a heavy presence of tourists.

But the Grand Hotel di Oritigia, unusually, has placed its bets on what it calls its Top-Profile offering, distancing – may we be allowed to say it – other reasonably good locales. A reservation is a must, and at eight o’clock in the evening, when we have been seated, the restaurant is already half full.  A half an hour later it is completely full. After the warmest of welcomes, accompanied by a sparkling wine, a Vorìa di Porta del Vento, I begin with scampi on a bed of red cabbage and a sauce based on Murgo Brut wine. The dish plays its cards on its contrast between the sweetness of the crustacean , favored by the red cabbage, and the Murgo Brut sauce with its citric and aromatic notes. A lovely contrast indeed. The wine: the match proposed by Marco for the meal is the Riesling Steinreich 2013 of Ansgar Clüsserath. Bracing and elegantly aromatic, it is one of the finest bottles of the Moselle. A creative inspiration is the eggplant parmesan cooked in a beer batter on a tartare of Fassona beef with a mustard-laced mayonnaise prepared without eggs. I then pass on to the first course. This is one of the plates which most impressed me during the summer season in 2016: a liquid rectangle of Ragusa cheese with marinated anchovies, a powder of citrus fruit, and peach butter.

The fresh pasta encloses a filling of soft Ragusa cheese accompanied by a diced peach in a butter sauce. The anchovy sits in the center and adds an intense flavor of the sea. A superb dish , well representative of Sicily.  I continue, capriciously, with the saffron-flavored tagliatelle noodles of Perciasacchi seasoned with a powder of oranges and pressed fish eggs, mussels, and a zucchini cream. Here as well, an inspired version of pasta, one with a local accent whose seasoning speaks both of the countryside and the coast.  The second course is of notable level as well, an extremely, surprisingly daring balance created by a pan-roasted sea bass with morel mushrooms cooked in almond milk and lightly smoked zucchini. A dish which, alone, makes the trip worthwhile. I finish with a coffee and anisette-flavored cream on a crumble of dried fruit accompanied by the Malaasia delle Lipari dessert wine of Nino Caravaglio.

But we haven’t finished. Many are the additional positive notes which make the experience so positive and enjoyable: a vegetarian menu and a gluten-free menu as well. A menu from the grill. A selection of cheese. And, something which greatly pleases me, flambéed dishes prepared at tableside. Antonio will take care of organizing the show for you. The grand tasting menu costs 80 euro. 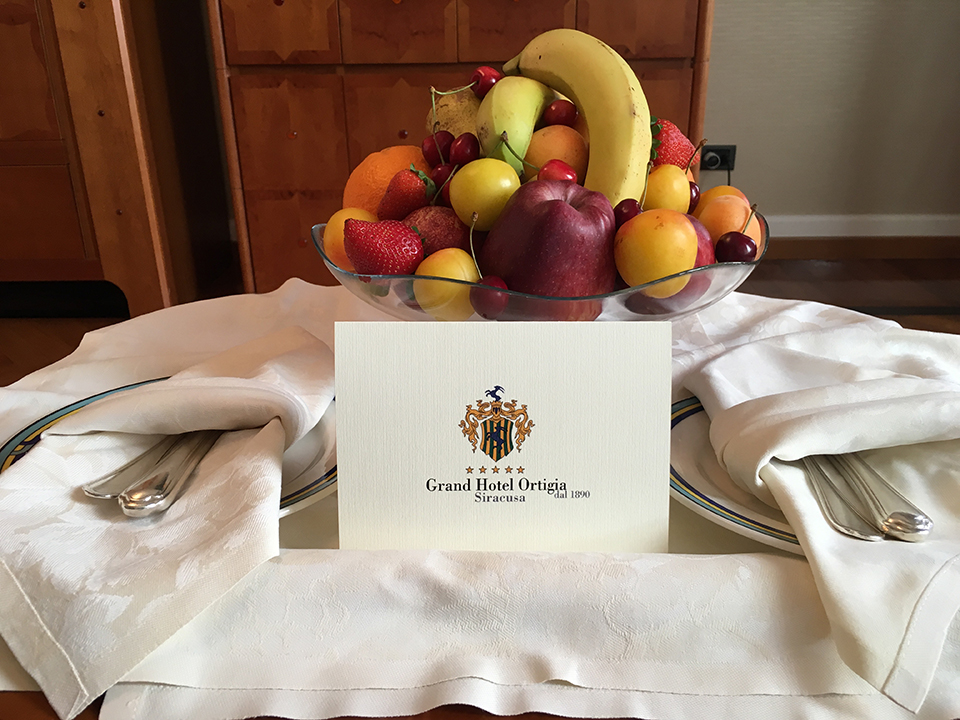 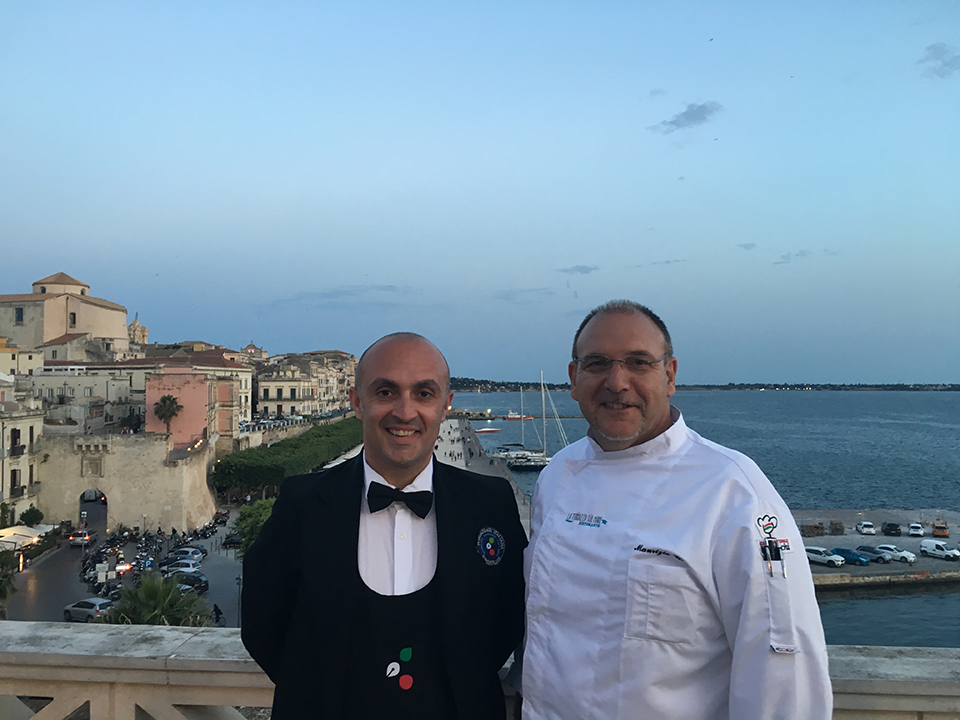 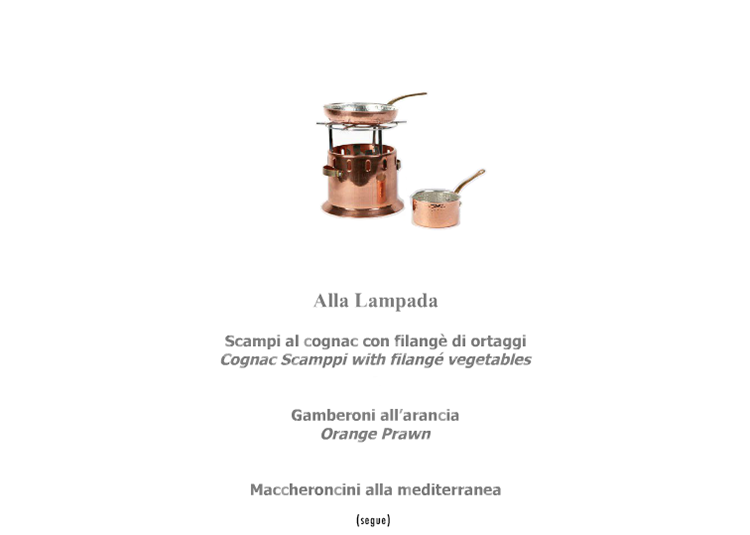 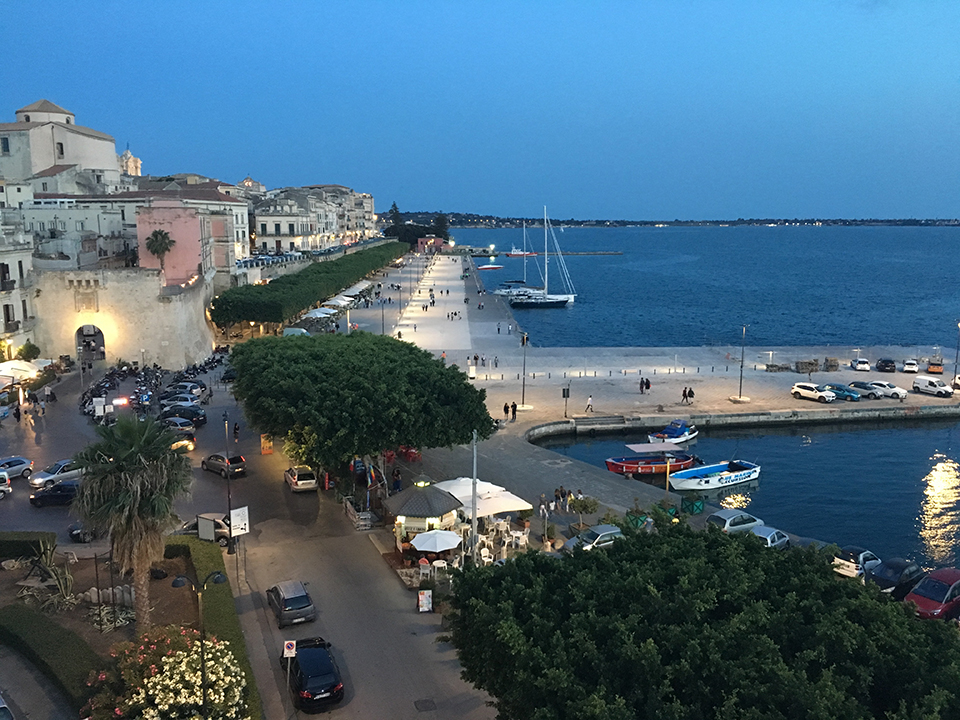 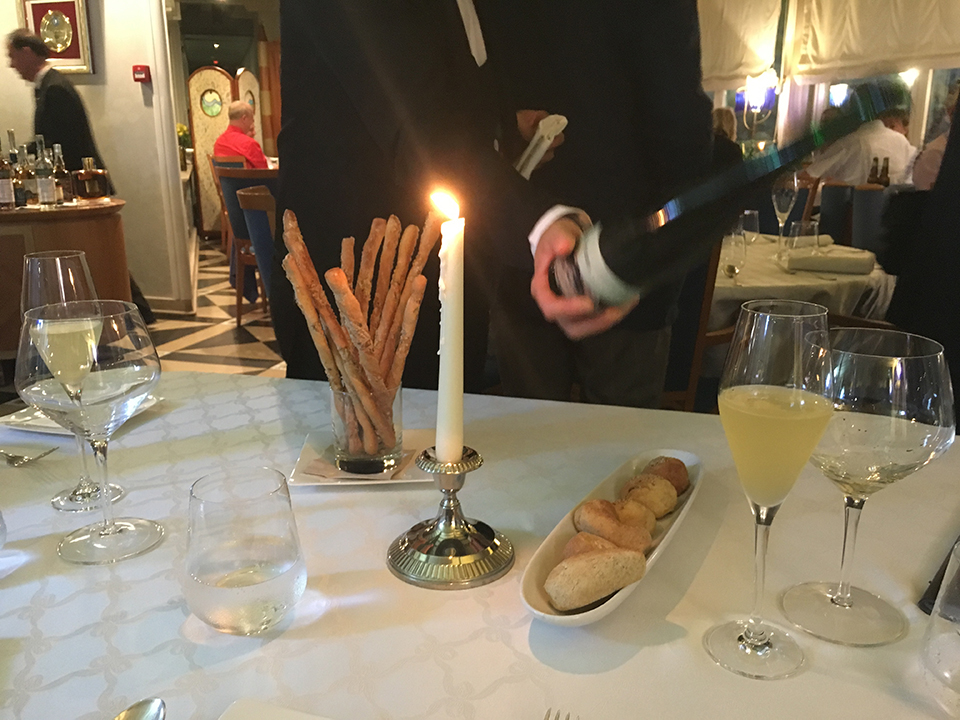 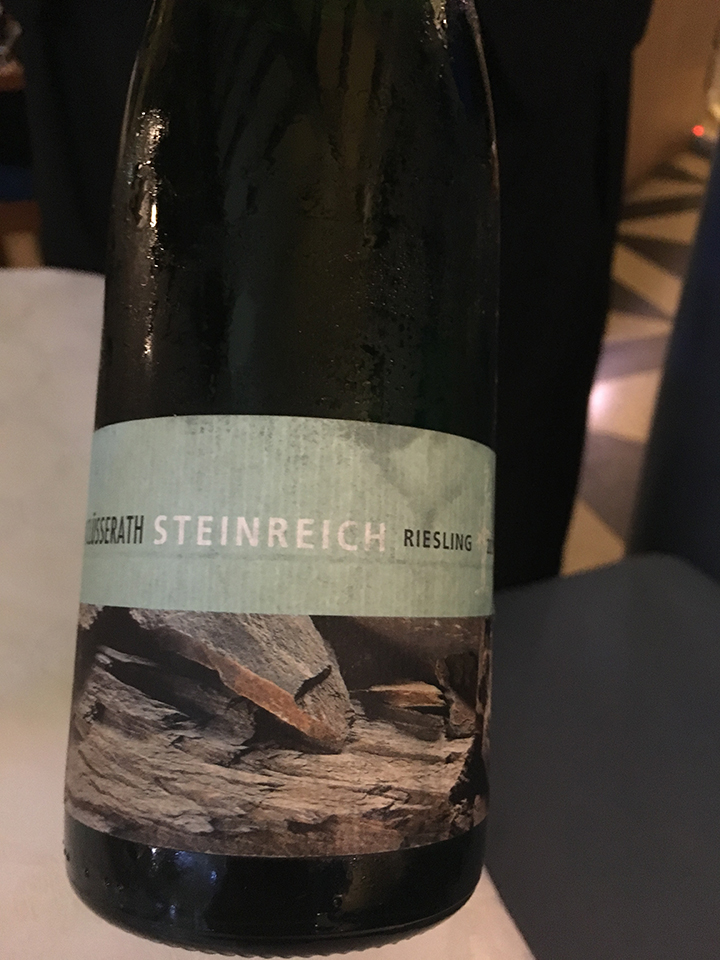 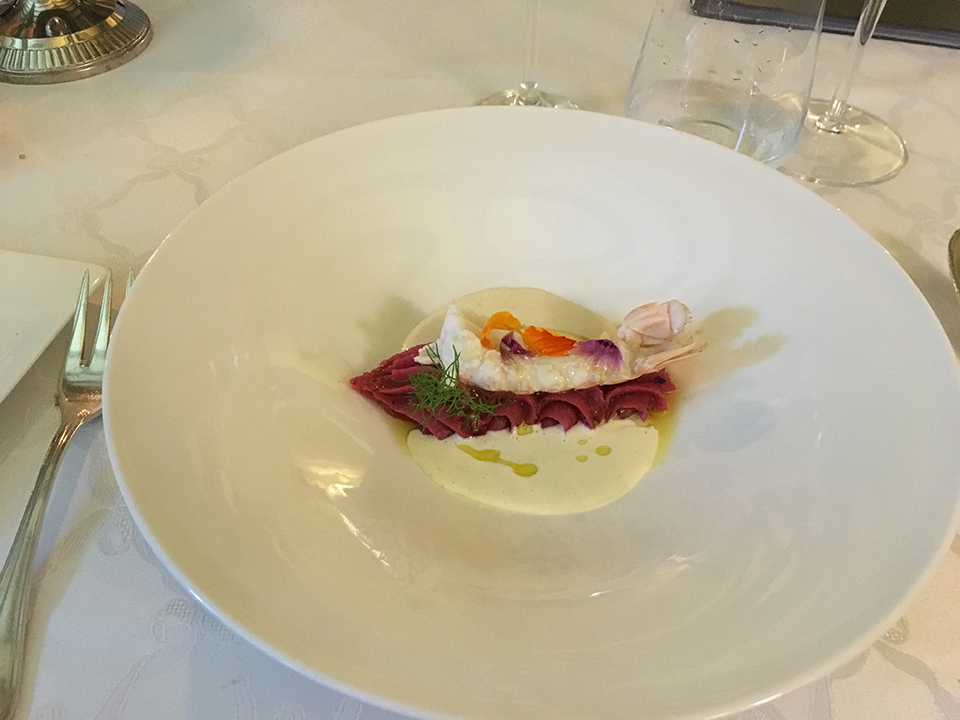 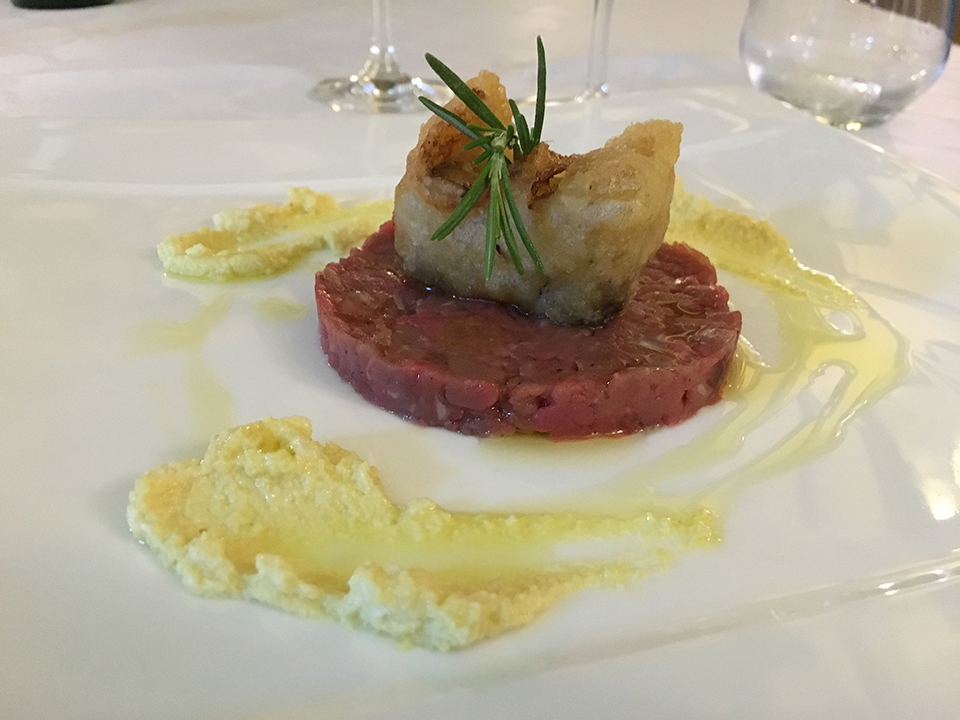 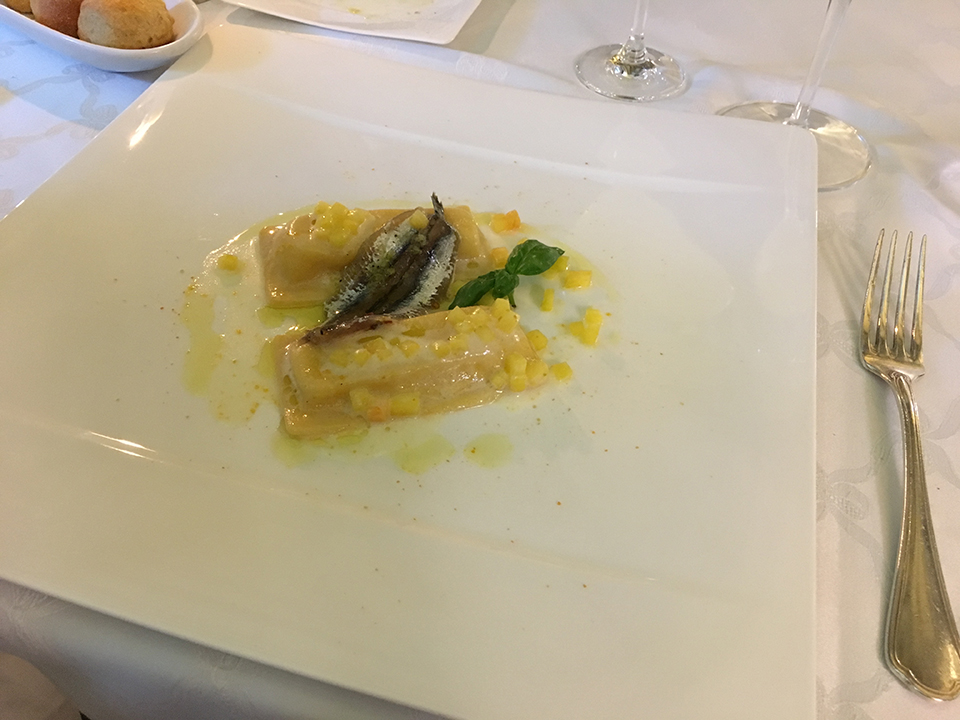 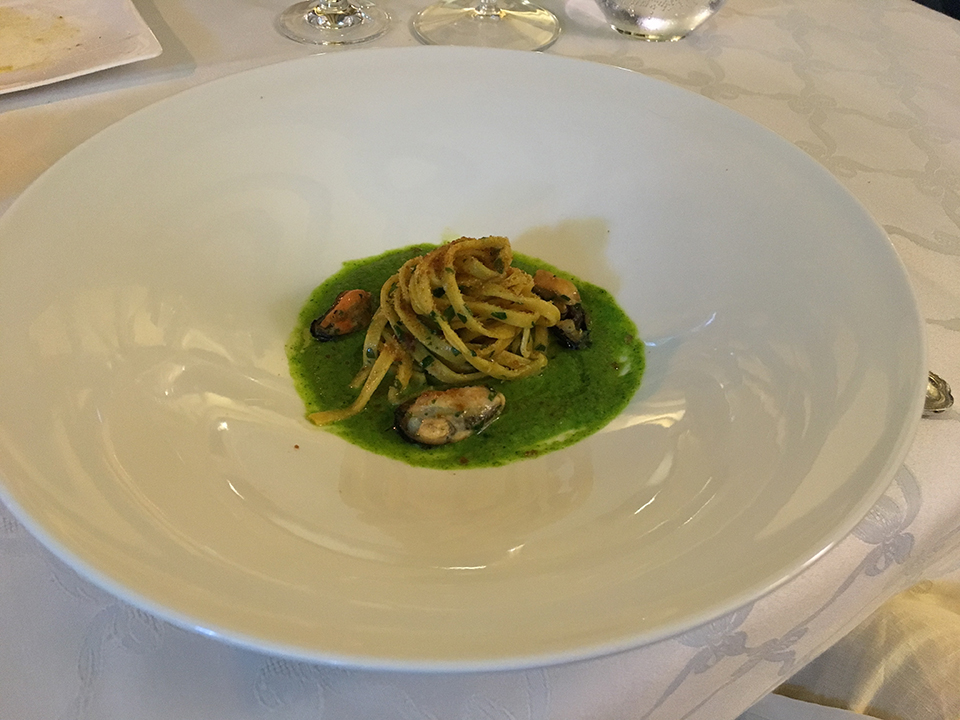 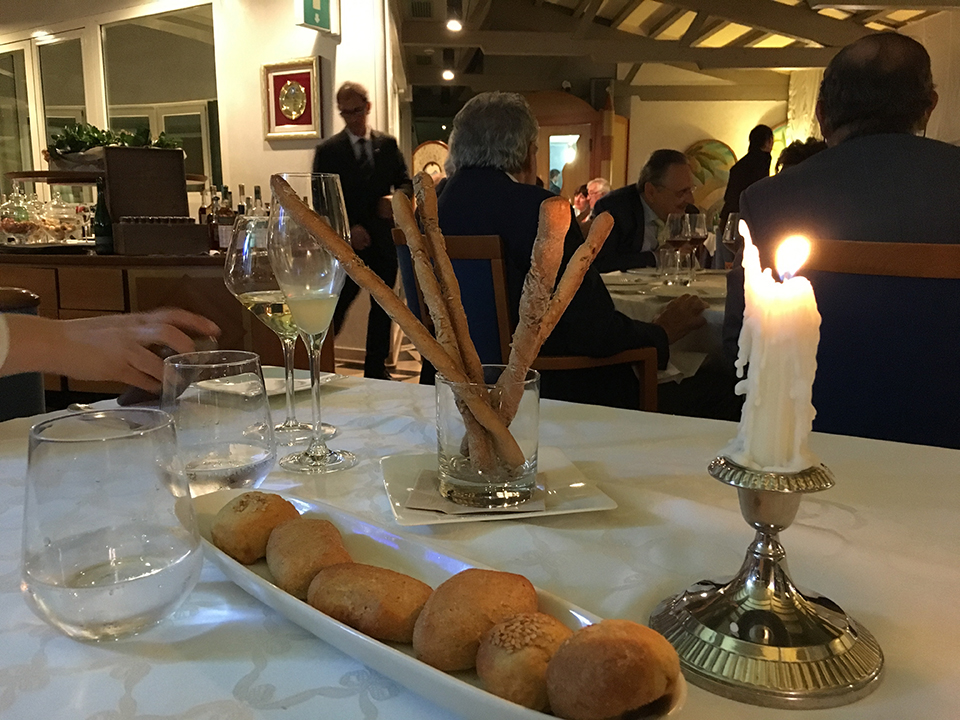 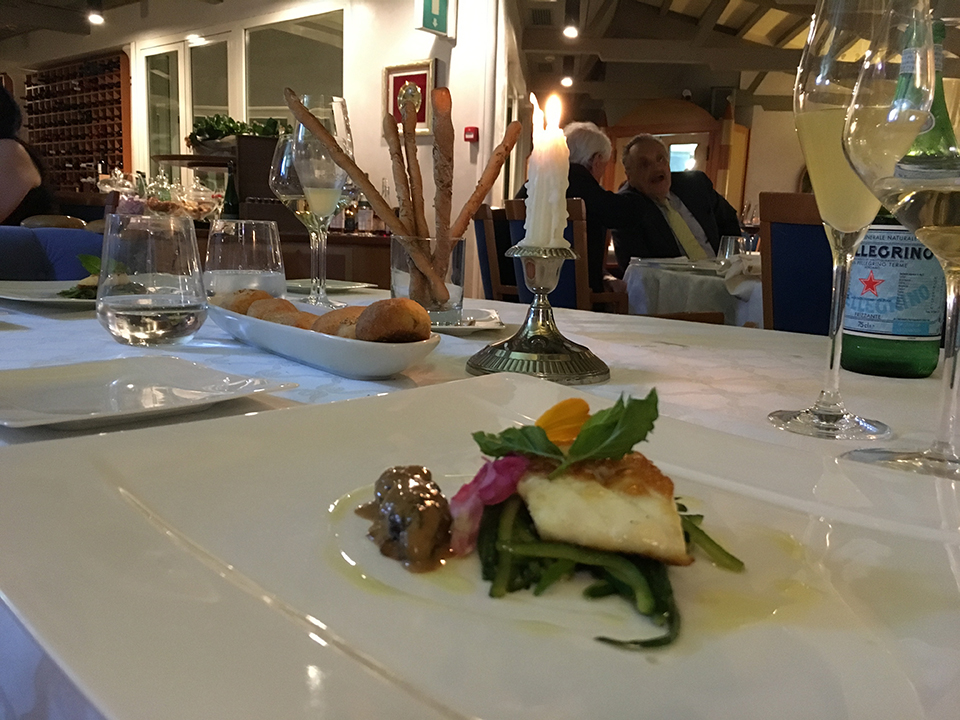 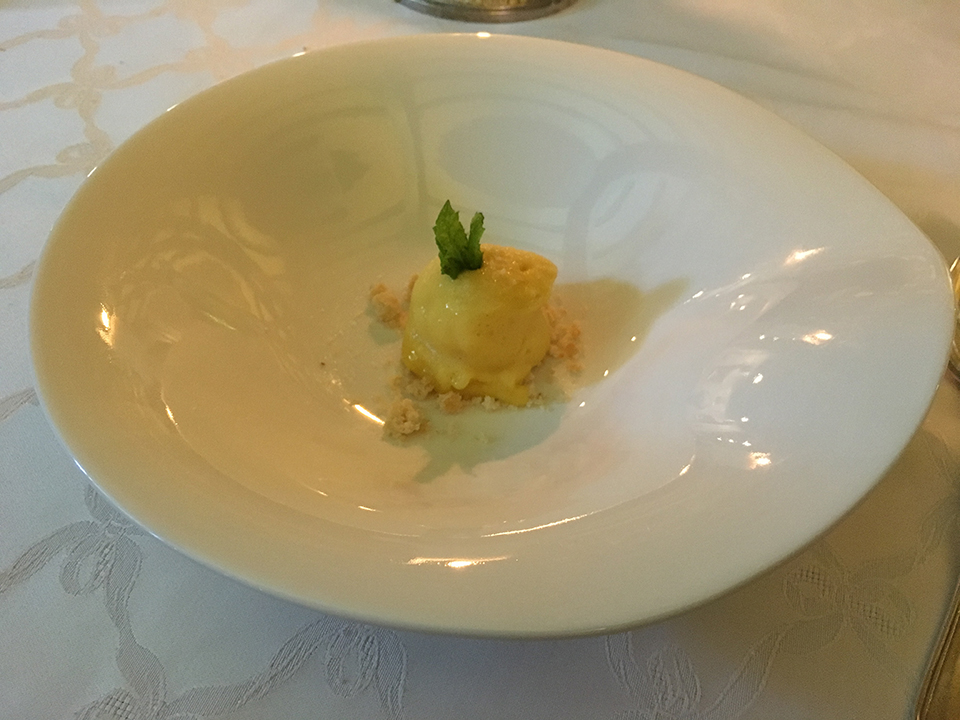 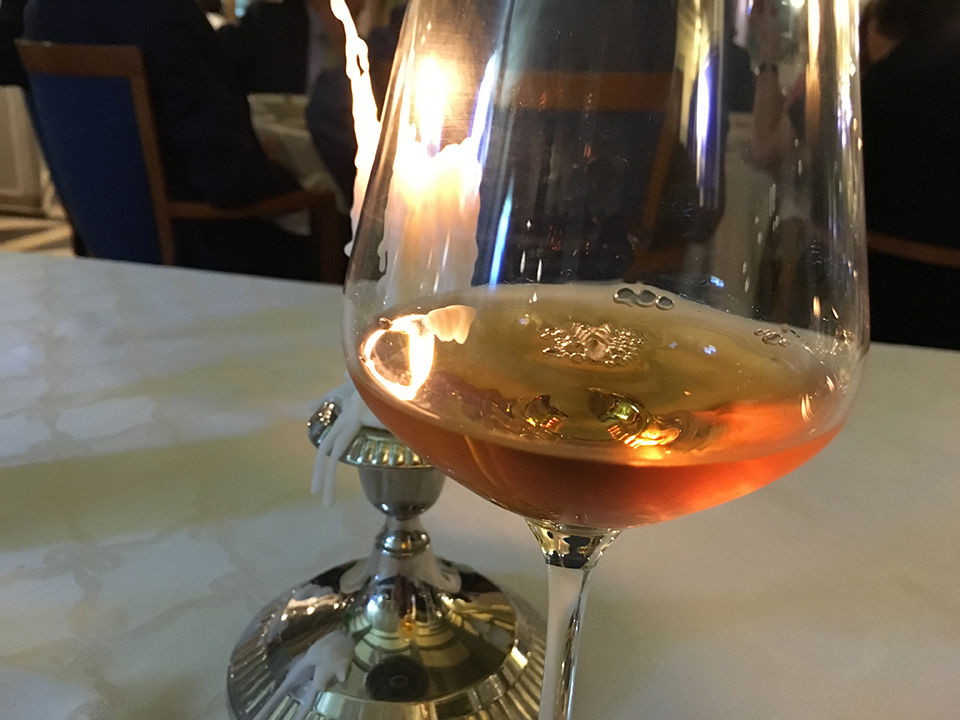 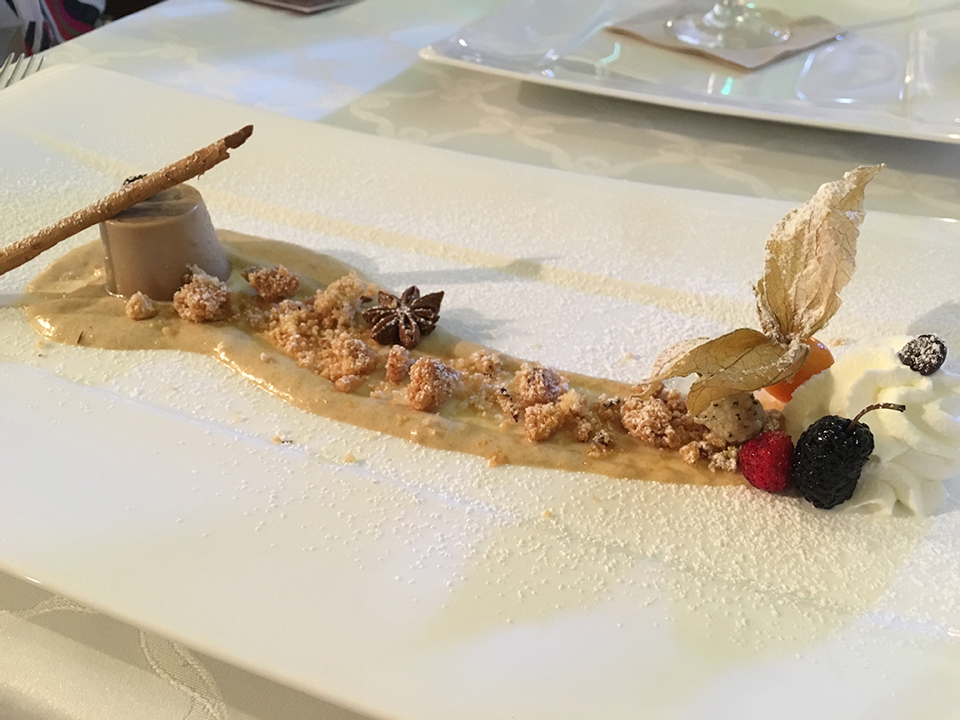 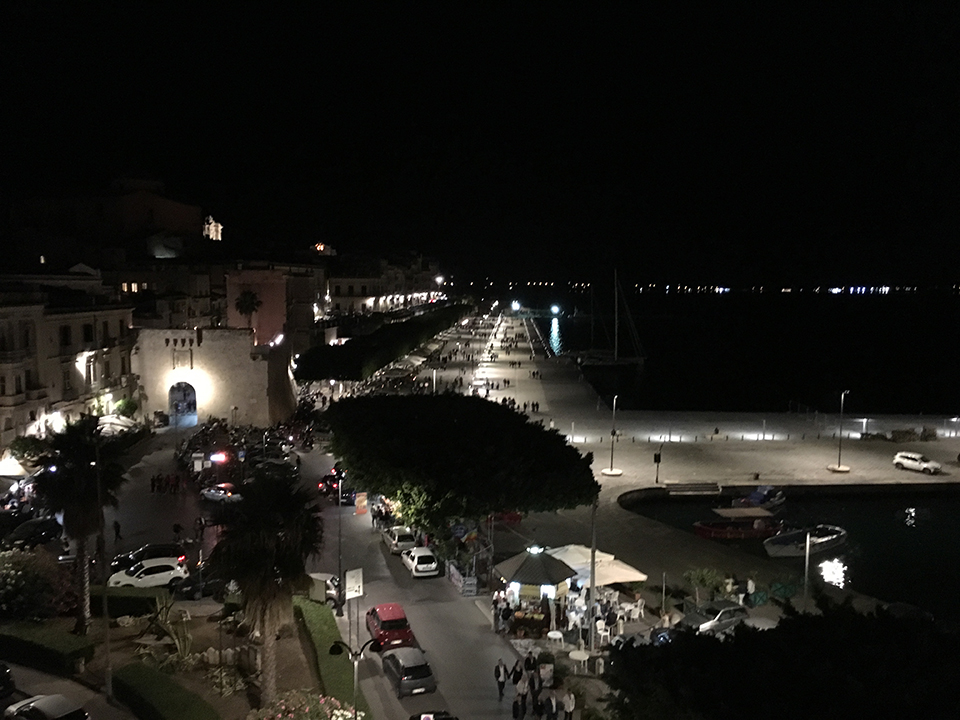 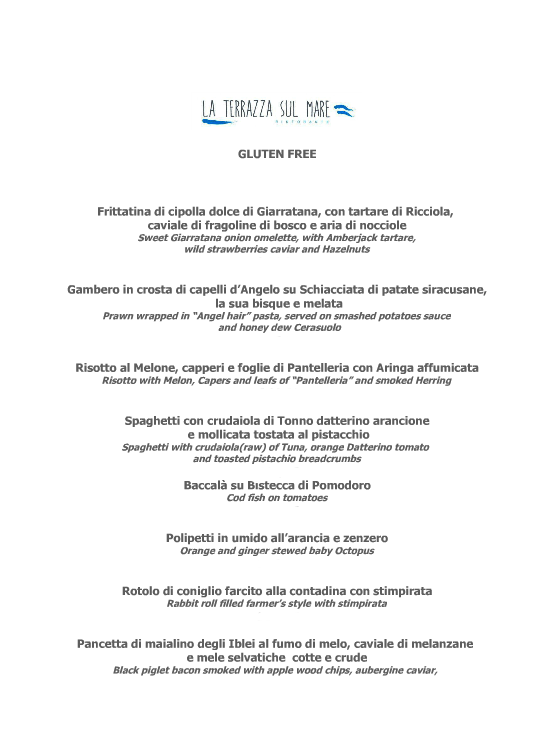