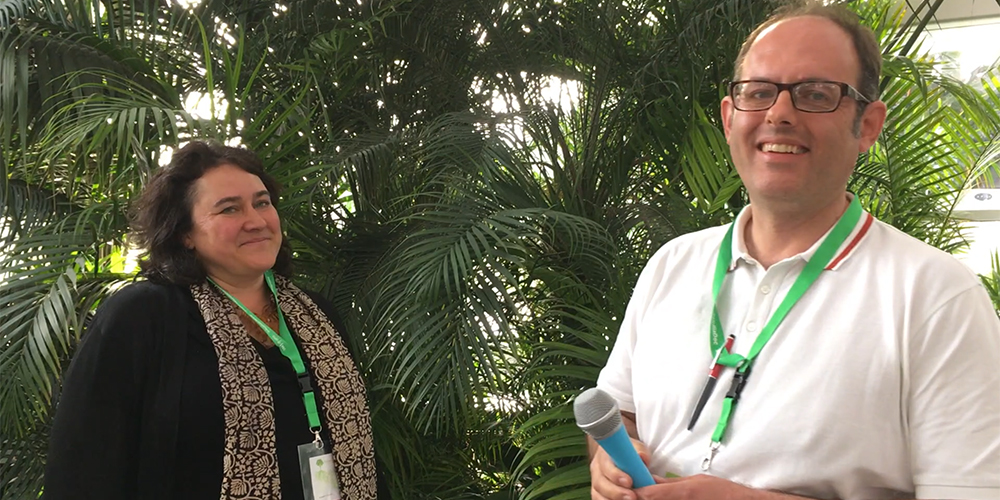 Monica Larner is a professional journalists, a critic who is among the best known on an International level, the collaborator of Robert Parker and his Wine Advocate magazine for Italian wine. Profoundly informed about Sicily and its wines, she has participated  in Sicilia en Primeur ever since the first edition of the event. We had the pleasure of interviewing her on April 29th during the last few minutes of her stay.

Q: Monica, your point of view is very important for us. Give us an initial impression of Sicilian wine.
A: the first thought which comes to mind is that, having tasted over one hundred wines in these last few days, is the slow and steady improvement in Sicilian wines every year. All of this is being confirmed in a concrete and positive way, and this is very satisfying. I perceive this in the tastings, because I reassume them during the course of the years and see, on average, two additional points for many wineries. We judges the wines one a one hundred point scale, therefore the growth in quality for a large number of producers makes me very happy. This means that the errors of the past have been corrected and that the production of good wine is moving ahead.

Q: Sicily is a very large Island, the western part has a well defined style, the southeastern another one; then there is Mount Etna, Faro, and the northeastern sector. Among all of these different expressions of Sicily, is there one which particularly intrigues you?
A: yes, certainly. I could say two things: very high quality indeed in certain wines in terms of the growing finesse and their future; in this case, for this type, I am thinking of the wines of Mount Etna. At the same time, Sicily has a vast patrimony indeed of very pleasurable grapes for wines which give immediate satisfaction, which have the ability to match recipes and flavors from all over the world. I would say, therefore, that Sicily has two different options: the first has the potential to open up new markets, for example with Nero d’Avola, which is a softer grape, a fruitier one which is immediately pleasurable in many markets; the other is a different type of wine, for example an Etna Rosso, which is a bit more austere, more sophisticated. Perhaps it is not for everyone, but is shows the other side of Sicilian quality, one which will be appreciated by those seeking wines for lengthy aging.

Q: how do you see the coexistence between international varieties and native varieties? Do you see significant differences?
A: Let’s take Bordeaux as an example: which is the most important variety? Cabernet Sauvignon or Merlot? It would be impossible to choose between them because they are two very important grapes, very different from one another, yet both are part of that territory. I see something similar in Sicily: there are international varieties which make excellent wines and there are native wines which do it as well. There is no reason, therefore, not to have both, two different expressions of the same territory.

Q: a last question, an opinion on “Sicilia” en Primeur, the event organized by Assovini Sicilia.
A: quite willingly, I have followed this event since the very first edition in 2003. I feel a great deal of nostalgia because I have lovely memories of what the event has given me. My awareness of Sicilian wine began here, at this event, in this space. As far as the organization, the service of the sommeliers, and the logistics, I can say that this edition was the best of all.

Lombardo Wines and the White Soils of Caltanissetta