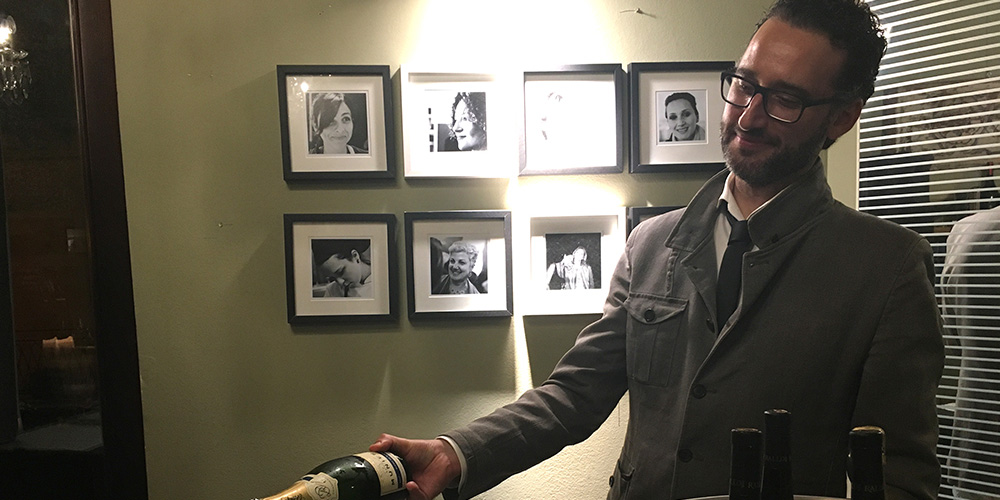 Restaurants and dining room service. I take notes after a long chat with Franco Virga, a Palermo entrepreneur who works in the food and wine sector. Four different locales, all top level in their own way: the Gagini Social Restaurant, a gourmet restaurant; Buatta Cucina Popolana, a bistrot with quality cooking; Bocum Mixology, a cocktail-winebar for aperitifs and much else; and, finally,   the “Gagini a mare” restaurant on Pantelleria, this last effectively a summer branch of the Palermo headquarters which opened just a few weeks ago at the Sikelia luxury resort of Giulia Pazienza Gelmetti’s Coste Ghirlanda cellars.
Difficulties emerge during the conversation and are centered on the figure of the “sommelier”, a very important role in the restaurant world and one which is often undervalued.

In a nutshell: Franco Virga, despite all of his efforts, has not found a suitable person working in wine for his locales. He has been searching for months but, in Palermo, a person of this sort apparently does not exist. A curious situation, in the opinion of he who is writing, given that there are at least three professional associations created for the formation of sommeliers ((AIS, FIS, and perhaps Fisar as well) which finish training approximately 50 men and women per year precisely for this task. Possibly even more. For this reason as well, it is difficult to understand why few titled professionals are actively at work in the field.

A brief interview on the question took place.

W. Franco, what do you need in a sommelier? What are you looking for?
F. I will answer the question by describing what I need. The person must know the wines of the territory, i.e. of Sicily, must have a good overview of the wines of Italy and of other nations as well. By this I mean France, Germany, Austria. I have a lovely wine card with an international spirit. In addition to this, at the present moment there is a significant request for “natural” and “organic” wines.  It is a category which I do not wish to ignore. Finally, and something very important, the person needs to know a few languages, first and foremost English, then French, German, or Spanish. Best of all, if he knows all of them. The city is full of tourists from April to October, and a third of my customers do not speak Italian.

W. Wait a second, the classic vision of a sommelier is that he be, first of all, a keen psychologist. Capable after a few words of conversation of understanding what the customer likes, what he would like to drink. Accordingly, he must know the dishes of the chef and find the right wines to match them.
F. Ok, but this is a premise which struck me as obvious. I need to go beyond this: a sommelier is an important partner for a restaurant, he is the pride, the exemplary figure who represents the locale to the public, an economic partner of great importance. He must choose the right bottles, find the right price for them, assure a proper turnover of the cellar. The wines can be an excellent advantage for the image of the restaurant. The clientele realizes immediately whether the restaurateur takes advantage of them with four bottles purchased on sale at a supermarket or discount shop or whether he invests in the wines, in the vintages, in the stemware, in the accessories, in the search for new and better bottles. This drama has its epilogue when the bottle is placed on the table.

W. Is it possible that professionals of this sort are not available?
F. I don’t know, I am unable to find them. I have called dozens of persons, the various associations as well, from FIS to AIS. I ask frequently, then nothing, the void. In my opinion they are not doing good work. Who participates in the courses? Lawyers, doctors, judges, engineers, civil servants. It doesn’t work. This is not what Italy needs. A very capable sommelier friend from Rome told me that I am looking for a nonexistent object. It’s very discouraging. Effectively speaking, the two best sommeliers whom I have had in my locales did not have professional training but learned here, on the job.

W. But is this really all the fault of these professional associations?
F. No, unfortunately there is something else to be said. The younger generation, the new people for the job, are discouraged as well. Underpaid. There are few prospects for them. At the end, you hear the typical phrase: “after all, we are in Palermo”. It’s to tell them they are wrong.

W. This could be called … no, is a problem for restaurants. I mean, in general.
F. Indeed. And yet, I can say that restaurants in Palermo have taken a giant step forward. At the moment there are many spots where you eat well. The chefs grow in talent, there are many available. Palermo is doing well, we are even a couple of steps ahead of Catania. In my opinion, entrepreneurs in this field should get together and increase the level of internal communication. In addition, obviously, to the communication with the rest of the world. We would all gain from this.

W. How much does a capable sommelier earn?
F. It depends on what he knows to do. To repeat: if he knows European wine geography, can get around with natural wines, and can speak a few languages, the salary can be an important one, well above an average one. Consider that, for our work, I include lodging for those who are not residents of Palermo. Above and beyond this, I would like to make one things clear: a sommelier who knows his job is a commercial figure who can be compared to a salesman. I do not exclude the possibility of agreeing to a commission on what a sommelier is able to sell.

W. Do you already have an idea on how to solve the problem?
F. I don’t have many alternatives. I will search outside of Sicily and outside of Italy. At the same time, I will found a Wine Academy to teach my own personnel here at the restaurant in order to meet my own needs. Five prerequisites: the first , no, the essential one is a knowledge of foreign languages, properly spoken, the second, a young age, the third, the willingness to come to work immediately at the restaurant, the fourth no teetotalers, the fifth, the ability to describe.

W. Why to describe?
F. I have run into many capable tasters, awkward however in describing what they are tasting. What use is a sommelier who isn’t capable of transferring his enthusiasm, his emotions to those he is serving? Wine is a pleasure to be shared. The sommelier who is a “circus phenomenon” and can talk about a wine with all of the usual descriptors, from the lily of the valley to roses, grapefruit, and rennet apples – what good is a person of this type for me? These words are not the point. The point, instead, is the territory, the efforts of those who cultivate, it, the men, the sweat, the perfume of the place, the soil. I am aware that it is necessary to study, it’s not easy, and mass market wine is not part of the picture. But this, do the current sommelier know this? Have they gotten the picture, do they have a clue? In short, I await CV’s and candidates.

Cinema: The Dinner, a film on inter-generational degradation

L'Oste e il Sagrestano, the Host and the Sacristan, or a dive into the past with eyes wide open