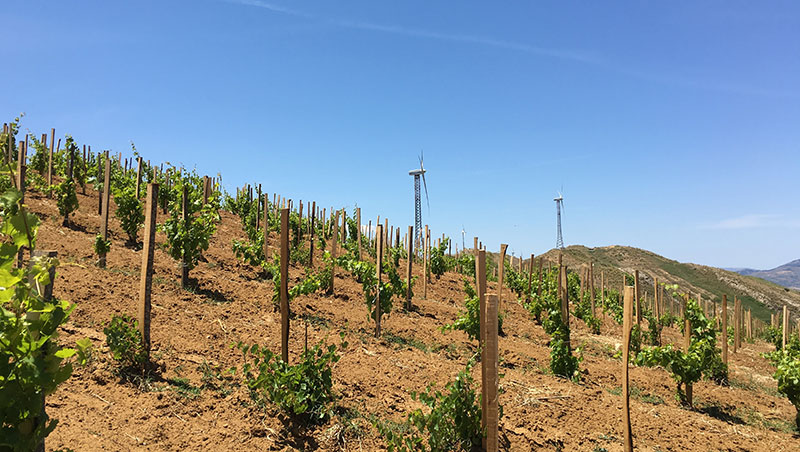 How rich and varied is the Italian vineyard compared to that of Europe? And how rich and varied is that of Sicily compared to the previous two? The answer is not obvious, holds many a surprise, and cannot be given with numerical data. An initial observation: the grapevine as we know it today is the result of thousands of years of evolutionary development. Selections, mutations, genetic re-combinations, climate, and manipulation on the part of man have resulted in an enormous number of grape varieties. Now, however, there are many fewer than in the past, and the wines we find on the market cannot be compared to those which were once available. There are many reasons for these losses: climatic changes, vine diseases, modernization, commercial necessities.

After phylloxera
To understand what has happened, we need to use as our starting point a small insect. The great difficulties created by this pest – a parasite which spread from North America all over Europe during the second half of the 19th century, though eventually resolved – even today are not entirely over. The vineyard of the Old World, from that period on recreated necessarily according to scientific criteria, has undergone additional deep modifications, this time driven by commercial motives and the force of the market. The grape varieties, those indicated by official research and by the sanitary authorities on the one hand, and on the other by the demands of Anglo-Saxon markets, channeled viticultural energies towards mono-cultural policies. French grape varieties, which then became known as “international” varieties – for example Chardonnay, Cabernet Sauvignon, Merlot, Syrah e Pinot Noir – were planted, with happy results, all over the world, cultivated and produced as wines from Peking to Melbourne, passing through Santiago. With a consequent loss of market share and product sovereignty on the part of native grapes.

An idea for distinguishing oneself, the French solution
It appears that the French intend to take a 150 year backward step to put a break on this decline and loss of identity. In the number 159 of the “Revue des Oenologues”, Olivier Yobrégat of the Institut francais de La Vigne et du Vin (the French Institue of the Vine and Wine), in an article entitled “Patrimoine 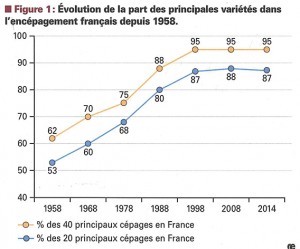 ampélographique francais et cépages oubliés” (“Ampelographic patrimony and forgotten grape varieties”) makes a distressed and moving appeal for the recovery of old grape varieties, those compatible with tradition, in order to put a brake on genetic erosion. Olivier Yobrégat denounces specific facts: from 1953 on, the date in which norms were created to establish four categories of varieties – recommended, authorized, tolerated, and banned – there has been a rapid genetic erosion. In other words, varieties have disappeared. Of the 550 known varieties, 250 of which are in the national catalogue, twenty constitute almost 90% of the varieties cultivated on French soil. Extending the analysis to 40 varieties, the percentage reaches 95% (see the graph). This is what is behind this desperate appeal. How to find a solution to this phenomenon? One idea: to enlarge the authorization to new, or rather, old, varieties, the so-called “relic varieties”, thereby reconstituting a part of the lost ampelographic patrimony. Minor varieties, minimum even in their numbers, but capable of creating new interest and halting the loss of bio-diversity.

Sicily
And so, France has begun in these months to pose the problem of the recovery of “forgotten grape varieties” with all the difficulties of the case. Sicily – instead – has already confronted the question and finds itself in an advantageous position. The island, in fact, began years ago to undertake a complex effort of recovery, moreover well documented and carried out with scientific research criteria (see “Identità e ricchezza del vigneto Sicilia”, or “Identity and richness of the Sicilian vineyard” by Giacomo Ansaldi, Dario Cartabellotta, Vito Falco, Francesco Gagliano, and Attilio Scienza). But there are other, and many, reasons to affirm that in Sicily there is much more than a recovery of bio-diversity driven by a self-regarding hedonism, the problem which is the starting point for the French. The island, for a combination of historical, social, and geographic elements, has, for three millennia, been a crossroads of diffusion of the vine and wine, its principal product. The civilizations and dominations which have followed one another over time have contributed to the spreading and exchanging of vegetative material all over the Mediterranean. For example, during the Norman epoch in Sicily (1060-1195), three languages were spoken, the expressions of the three civilizations which had previously dominated: the Greek, the Arab, and the Roman. To the point that Palermo was called “Urbs felix, populi dotata trilingui” (“a happy city, whose people are endowed with three languages”).. A family viticulture, one based on local consumption and the conservation of native varieties continued during the Angevin period, that of the Spanish, and that of the Bourbons as well. Moving on to questions of soil and climate, Sicily is unquestionably one of the places in the world with the largest degree of variability: arid zones and rainy zones and volcanic, sandy, clay-rich, calcareous, and marine-origin soils, all these conditions and factors have assisted the grape varieties introduced over thousands of years to spread over the most suitable areas for their cultivation. One indication of varietal richness and climatic variability which should suffice is the fact that the harvest begins in late July with international white varieties and concludes on Mount Etna in November.

The Research
The research began in 2003 thanks to the stimulus and the efforts of the Section of Structural Intervention of the of the Department of Agriculture of Sicily’s regional government. The Section entrusted the scientific coordination and the monitoring of the project operations of clonal selection and the recovery of old vine varieties to the Universities of Palermo and Milano and to the Experimental Institute of Plant Pathology of Rome. An enormous mass of data was gathered, probably the most extensive research in this sector ever carried out: approximately 7,000 plants examined in the entire territory of the region, more than 480 vineyards investigated, 90 townships involved, and over 2,600 tests carried out. Some 3,500 plants were selected on the basis of this data, and experiments in the field for comparison and for approval are have been undertaken at Marsala (in the province of Marsala) and Comiso (in the province of Ragusa. At the beginning of 2009, after a careful evaluation of the results obtained in micro-fermentation, it was decided to concentrate the work on a certain number of varieties which presented inter-varietal variation which had emerged during the phase of selection and on those grape varieties about which nothing was known, to be precise certain old varieties. The first thing to be done was to carry out all the possible phenolic and ampelographic observations as well as those regarding production and, successively, those concerning the grapes themselves. These led to a definition of the profile of the grapes. The most important result was the identification and regular authorization of nine clones and the process under way of authorization of thirteen of the presumed clones of the different varieties. The research on the genetic profile of the minor varieties aimed in addition at the reconstruction of the relationships of parentage between Sicilian grape varieties and those of other regions of Italy.

For example, Sangiovese
The relationships of parentage between the major Italian grape varieties and those of Sicily led the research to consider Sangiovese a variety which presumibly came from the area of the Tyrrhenian Sea connected to the ampelographic platform of Sicily (see Di Vecchi Staraz e al., 2007).  Among the 48 profiles of the Sicilian varieties which were analyzed, seven of the minor varieties showed a direct parental relationship with Sangiovese: Arbanello, Bianca, Lievuso, Lucignola, Nerello mascalese, Orisi and one selection of Visparol, while, among the principal varieties, in addition to Frappato, Nerello Mascalese, and Perricone(whose father-son parental relationship to Sangiovese was already known). Carricante was identified as a variety which was a second cousin to Sangiovese. And, additionally, Lievuso was shown to be a progenitor of the crossing Sangiovese x Montuonico, as was the case with Nerello Mascalese (see Gasparro et al., 2012). Given that the area of origin of the production of these varieties connected to Sangiovese is that of the Nebrodi mountains in eastern Sicily, it follows that this part of Sicily is the area of the island with the closest connection to Sangiovese.

At this point, there is only one thing to be done, but it must be done quickly: accelerating the work of authorizing the old varieties, transfer them to plant nurseries, and close the circle by making them available to growers of grapes and producers of wine. The risk of wasting this umpteenth lovely opportunity is high. What is involved is the personality of the wines, significant commercial advantages, and the safeguarding of bio-diversity. Why renounce this possibility? On the contrary, concerning this last aspect, current climatic changes might require efforts which are not immediately sustainable which Sicily has already confronted given that in its genes there are centuries of mutations in a hot climate. In other words, Sicilian genotypes might have certain advantages insofar as they can tolerate extreme climatic conditions, therefore ideal for genetic improvements. In short, this is an opportunity which Sicily cannot miss.

Our thanks to Alessio Planeta and Giacomo Ansaldi for the interview and to the material made available.

Sources and Excerpts of texts: 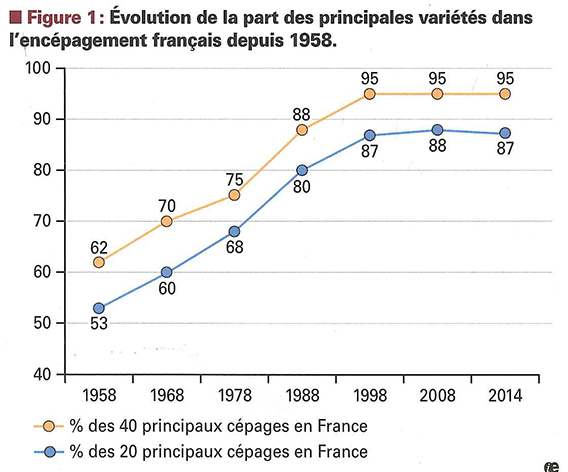 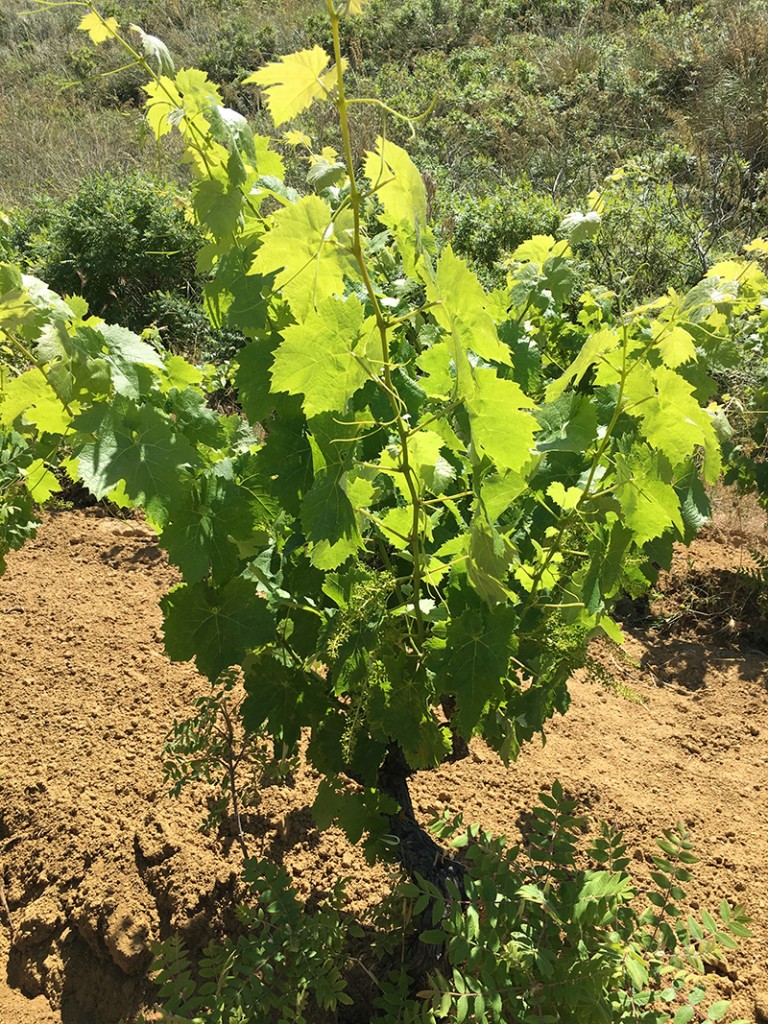 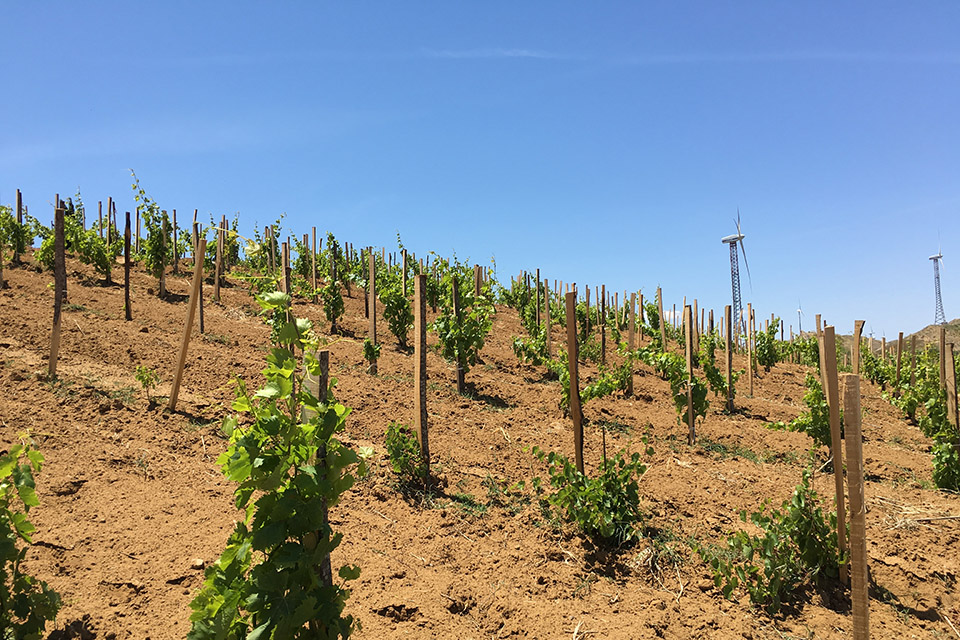