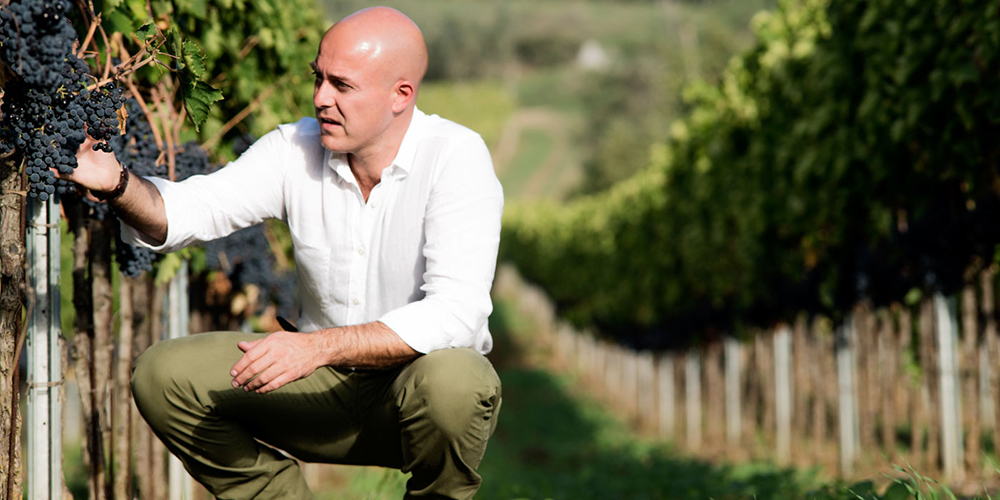 Emiliano Falsini, born in 1973, is one of the most active – and highly regarded – consulting winemakers of his generation. Born in Empoli and raised in Limite sull’Arno, both near Florence, he attended the Technial Agricultural Institue of the city before graduating with a doctorate from the University of Florence with a thesis on the ripening of the Sangiovese grape. In 2000 he joined the Gruppo Matura, a group of viticultural and oenological consultant founded by Alberto Antonini and Attilio Pagli, but not before working experiences both in California (at the Roberto Mondavi winery, not exactly a minor spot to begin one’s professional career) and in New Zealand (“to improve my abilities to work with white grapes”). Fifteen years of intense consulting work have followed and, something rather rare for a Tuscan oenologist, southern houses have an important place in his portfolio of clients. And, among them, those located in Sicily have a major place.

When were your first professional contacts with Sicily and, at that time, what did you know about its grapes and wine?
In late 2004 and early 2005, with the Girolamo Russo winery in Castiglione della Sicily on Mount Etna. The contact was somewhat fortuitous, Giuseppe Russo had previously spoken to my colleague in the Matura Group, Lorenzo Landi, but he already had a commitment with another important winery in the area and decided to give exclusive rights to his services to this producer, with whom he already had an on-going and positive relationship. As far as my knowledge of the viticulture and the wines of Sicily is concerned, I must confess that it was quite limited, to tell the truth I had never even been on the island. I began to work with a producer who was equally “green”, Giuseppe Russo had studied music  and, even though his family had landed holdings of notable importance, he had never been involved with the vineyards. Fortunately, these holdings included old-vine parcels in very favorable positions, and these have been the basis of the work  we subsequently developed. I can add that his passion for his new calling, that of a grower-producer, is both intense and deeply felt  indeed. Moving forward, a certain culture, i.e. the knowledge about the grapes we gathered from our work, how to cultivate them and how to ferment and age them, became the common property of both of us.

The production on Mount Etna of that period gave you some idea about how to deal with these grapes, how to transform them into pleasurable and appealing wines?
My involvement with Mount Etna began just when the first wines of a new level of quality and expressiveness began to appear, before then wines which could be described as models were few and far between and, in any case, it is not enough to have the possibility of tasting wines which impress and satisfy you, you need to know how they were made, and for this the tasting process is anything but sufficient. Perhaps it is worth the trouble to remember that when I began to work with the grapes of the area we were coming to the end of a cycle in which the emphasis – I believe we must honestly say it – was  on power, intensity,  and concentration at all costs. And it is also possible to say, with 20-20 hindsight , that many of these wines were” powerful” only because they were” constructed” to be so in the cellars, studied to achieve a certain style with high percentages of blending wines and lavish doses of new oak. I and many other young colleagues were rather tired with tis style which unquestionably left little room  either for the expression of the varietal character of the grapes or for a sense of territory, the precise spot of production and the specific soil and micro-climate of the vineyards. I cannot say that we were looking for a new approach, nor that we were more on the right track than our older colleagues, after all the wines of the preceding generation were anything but models of fullness or amplitude and more body and richness were obviously necessary. But I feel that I should say that to believe you can produce a potent and sumptuous wine on Mount Etna is pure illusion, the grapes themselves don’t allow you to do so. Nero Mascalese is a great variety, multi-faceted but a bit edgy, a bit tannic, it requires attention and judgment in every phase of its transformation into wine. At times it is compared to Barolo, and in fact, took as models certain classic examples of Barolo such as those produced by Bartolo Mascarello and Beppe Rinaldi. I learned quite soon that you can push extraction only until the sugars have been transformed into alcohol, after you need long macerations on the skins and much patience. In addition, unlikely many professional figures of the previous generation, and I say this not to document a fact, not to presume any sort of imagined superiority, I have a viticultural background and training and I have worked very hard in the vineyard, thinning out the leaves, dropping a part of the crop, and always seeking maximum ripeness in the grapes, the true basis of better wine.

The collaboration with Russo has been, up until now, your  sole working experience in this appellation?
No, more recently I have been working, again with much pleasure, with Alberto Aiello Graci and the Graci winery. The wines we have made have only cemented the convictions that developed with Russo. I will add here that the subdivision of the vineyards which we have carried out is very helpful during the harvest, we pick and selected the grapes not only plot by plot but, subdividing, within the boundaries of the individual parcels as well as there can be notable differences – both in quality and in personality – in the grapes of a single plot. In the cellars, we are working both with conical oak fermenters during the fermentation and with oak casks during the aging, and I have had yet another demonstration that the wood must be used with discretion during the aging process. The casks are small and there is little new oak involved, it serves no purpose whatsoever.

Given that, with the exception of Etna and the Faro appellation, Nerello Mascalese and Nerello Cappuccio have not given particularly positive results in other parts of the island, I imagine that Nero d’Avola is the red grape of greatest significance for you in Sicily. You certainly must have had a series of different experiences with the variety, can you describe them?
Certainly, my first encounter with the grape was with a producer in the Faro appellation, Enza La Fauci; I very much  like the zone, but here there the protagonist, the principal player, is Nerello Mascalese, Nero d’Avola is only part of the supporting cast. I had the opportunity later to enlarge and deepen my professional knowledge of Nero d’Avola in the province of Ragusa when I began working with Paolo Calì. It seems that Nero d’Avola was originally from Sicily’s southeast  (Avola itself is in the province of Siracusa), therefore Vittoria, where the Calì winery is located, could be considered the westernmost outpost of the original area of cultivation. It is, accordingly, no surprise, that Nero d’Avola has to share center stage with another variety, Frappato, which here has found the spot with which it has an elective affinity. But let’s talk about the Nero d’Avola of this zone. A good part of the production of the wine is utilized for Cerasuolo di Vittoria, the flagship wine of the area; used as a support for Frappato, it adds structure, color and, additionally, acidity. The soils are sandy, and here, as elsewhere, attempts to exaggerate extraction  are pointless, our pure Nero d’Avola wine, Violino, is aged solely in stainless steel tanks and the same can be sad for regular Cerasuolo di Vittoria, Manene. The more ambitious bottling, Forfice, is aged in oak, but these are casks, we have no desire – because it is simply not feasible – to increase the level of the oak without damaging the wine.