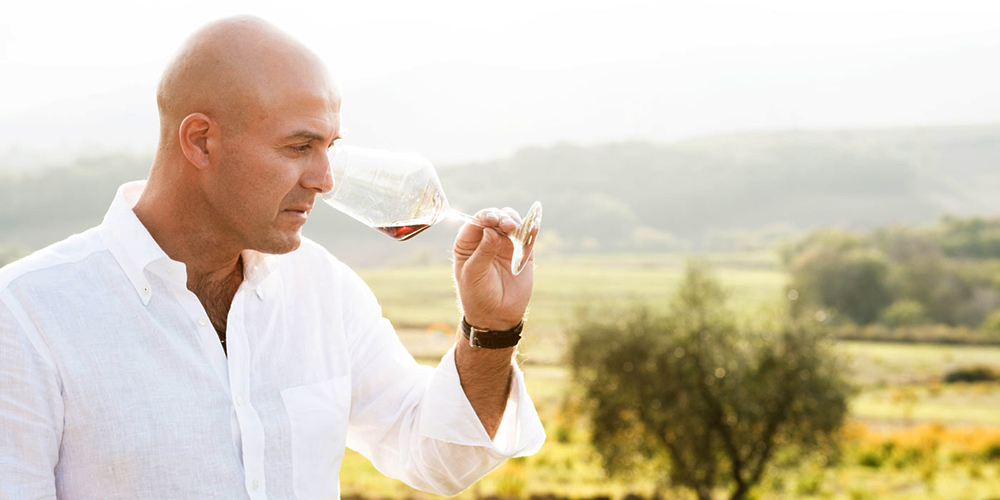 (second part of the interview)

It is obvious, however, that you got to know Frappato only at this estate, the variety is virtually nonexistent  in Sicily outside of the province of Ragusa
True, and it was a most welcome surprise, I consider it a great grape variety, fragrant and elegant with a purity of fruit which I can only call enchanting, at times it is like drinking raspberries. We attempt to ferment and age the wine in a way which fully respects these characteristics. It is normally thought of as a wine to be exclusively drunk young, but I do not entirely agree, it is a wine with tannins, at times the wines appear to resemble those made from Calabria’s Gaglioppo though – fortunately – less astringent. It is favored in our blend of Cerasuolo di Vittoria, the result is more finesse, the wine becomes more expressive and  territorial as a result. In my opinion, it is also an excellent grape for rosé wines, in short this is a very versatile variety indeed, and it is given me much satisfaction, I have worked very hard to achieve the results  I was hoping for, but when positive results begin to rapidly appear our work obviously becomes more stimulating. In this case as well, the viticulture is clearly of fundamental appearance, and the decision to harvest later than before has given us suppler wines, less acid than the previous ones.

Have you also had the possibility of working in the more “classic” zones for the principal Sicilian grape varieties?
Yes, at the Masseria del Feudo estate in Caltanissetta, where my work with the owners began more recently, in 2013. The production of wine began more than a century ago, in 1906, in a part of the former fiefdom of the Braciforti princes, and the wines were of good level when I arrived, always a pleasure,  at times when you begin a new project you find some unpleasant surprises in the cellar, wines which are a real headache to adjust before bottling. Obviously a few thing s have been changed, but only to achieve a greater elegance and sense of territory. Though we are in the center of Sicily, the property also has international grape varieties in its vineyards, and they have found a very suitable habitat here, both Syrah and Chardonnay are cultivated, and the wines, for years, have found a clientele which appreciates and purchases them. We have lightened up the approach to these wines, however, the Chardonnay now ages in 660 gallon casks, small oak barrels are no longer utilized, whereas the Syrah never sees oak at all, we utilize solely stainless steel tanks for the aging before bottling. I have worked both in California and New Zealand, but I do not have the slightest desire to attempt to make “New World” wines. The style itself does not interest me, and then, objectively, the conditions for this style do not exist during the growing season. Caltanissetta is over 1800 feet above sea level and the property and its vineyards are even further to the north, temperatures over 100° Fahrenheit like those in California and Australia do not exist, the climate is often somewhat cool and calculating the proper moment to pick the grapes is a critical decision in our work. Fortunately Francesco and Carolina Cucurullo, the owners, are fully committed to wines of real quality at this family winery and I can count on their constant and effective assistance during the entire year. To return, however, to the estate’s product line: Nero d’Avola is central to our work, it accounts for 40,000 bottles in a normal vintage. It is offered in two different styles, one which aims at a wine of much sustained drinking pleasure, savory, with much fruit, and long and satisfying as well. A wine of this sort obviously never sees oak. The Nero d’Avola selection, Rosso delle Rose, which has a greater structure and richness of substance, does see oak during its aging, but matures in casks, we no longer use – and are quite satisfied with our decision – small barrels, which we do not consider suitable for our grapes, grown as they are in this particular climate. They might be suitable in another situation, but certainly not here, and we do not feel their absence in our cellars or feel any sort of nostalgia for the period of their use. The greatest surprise for me, however, and I can state it on the basis of other Sicilian wines made from this variety which I have tasted, has been the Grillo grape, a variety which I, as a Tuscan, had never worked with previously and did not know either from a technical point of view nor for its aromas and flavors. I have discovered a fragrance and aromatic richness of a notable level in the wines I have worked with in addition to a very attractive structure and volume. We are only at the beginning with this grape, but I firmly believe that it has an important future.

It would appear that Sicily occupies an important space in your life, is there room for other projects and initiatives?
Fortunately I do, I have been working for a few years in a little known area, a zone which even in the past was never an important source of wine. It is in the town of Librizzi to the west of Messina, we are in Mamertino appellation about 35 miles from the city. I said that the zone was never important in the past, but this, technically, is not true, Mamertinum was considered one of the great wines of the ancient world and it is said that it was the favorite wine of Julius Caesar. Not necessarily a certified guarantee of high quality, Napoleon Buonaparte, for example, apparently watered his Chambertin! But in the current epoch there is little production in the appellation, as is the case, in general, in the entire province of Messina. The Mamertino DOC, in fact, can be said to exist more on paper than in national or international markets. Despite this fact, however, this project  – a collaboration with the Gatti winery –  has been very stimulating for me. The current owner, Nicolas Gatti Rossi, comes from a family with a long history in the area, one with landed property planted not only to vineyards and olive groves but, additionally, to citrus fruit, walnuts, and hazelnuts. Wine has produced here since 1825. But he grew up in Argentina and, once he returned to Sicily and decided to produce wine of a certain level once again, planted, logically at the time, international grape varieties, Cabernet and Merlot to be precise. Which, to tell the truth, do very well in this area, where the soil consists of calcareous clays, unlike those of the Faro DOC which consist of clay and mica. I work with these grapes in various parts of central Italy, including ones with an important reputation for Bordeaux-style wines such as Chianti Classico and Bolgheri. But there are very favorable conditions for these wines in the province of Messina as well, we are in a spot which I could define as “coastal hillsides”, the township is at 1650feet above sea level, and to this fact we can add that the sea, quite close by, helps to create both a fresh climate and a constant breeziness, winds which blow through the vineyards and maintain coolness and healthy conditions for the grapes. And these are very positive factors. Compared to the Faro appellation, the humidity is higher but there is less rainfall. The Cabernet-Merlot blend we produce has excellent varietal aromas and flavors, there are the balsamic notes, the herbs, cassis fruit, and the wine is neither heavy nor cloying. The alcohol is around 14°, by no means excessive when you consider that Bordeaux wines of this sort  – produced some 850 miles further north as the crow flies – now reach 13.5°. But what has been of greater professional interest for me, however, has been the Nocera grape, a variety which is anything but easy to deal with. The bunches are quite large and the acidity is very high indeed, even higher than that of Nero d’Avola, and much of this is malic acid, even sharper, more acerbic, and more  cutting  on the palate. You need to work very hard in the vineyard, thinning the crop so as to leave no more than four to five bunches per vine, at times eliminating the wings of the bunches, and harvesting as late as you possibly can. But the wine is worth all this trouble, we are talking about a very characterful grape, one with much personality, spicy and peppery on the nose and with some very appealing flavors of berry fruit on the palate. It ages well in oak casks of a certain size, those which we use, fortunately the grape is not at all tannic, the presence of tannins would only complicate matters. It is certainly a wine of character and personality, therefore, unmistakably individual compared to other wines either from Sicily or from Italy as a whole.  And, equally important, produced only here in this spot, a wine which expresses, therefore, along with Sicily, its zone of origin. As far as tannins are concerned, however, we are about to come to grips with the Perricone grape, which we have begun to work with; at the moment I prefer not to offer any thoughts or observations, we have just started and it would be senseless, too risky, to attempt to attempt to arrive at any sort of conclusion. Some people might think we are quite mad, for what conceivable reason should we accept these challenges when we are clearly dealing with wines which will be appreciated and understood by a rather small public, not a substantial, more commercially interesting one? But it is precisely for this reason that we should meet this challenge, pick up the glove, these will be unusual wines, different but ones which cannot be compared to others, offerings which will exist, and can only exist, here in this area, “territorial” in the best sense of the word. And this is also one of the reasons that Sicily is so attractive to me, it gives me a chance to leave the routine work of our profession, create something different, in fact unique. For this reason as well, I would like to express my gratitude towards the island and towards the Sicilian people as well.