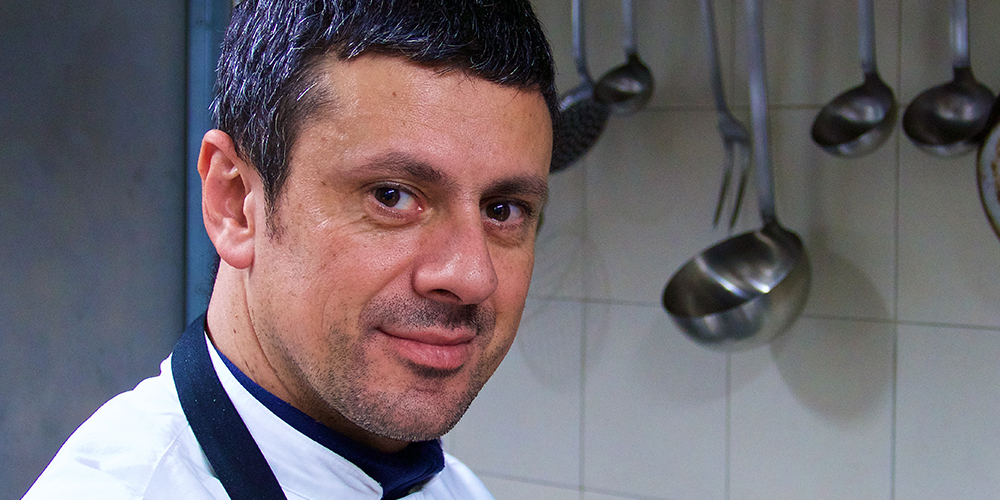 The first time I had the pleasure of seating myself at the table of Franco Agliolo was in early May on returning from the Aeolian islands. One tip had come from a trusty friend, another from Nicolas Gatti Russo, an important producer of Mamertino DOC wine whose splendid vineyards are located near Librizzi in the province of Messina.

Ambrosia – this is the name of the restaurant – was the food of the gods on Mount Olympus, of the “immortals” or, rather, what rendered them immortal. It should be recalled recalled that the nymph Thetis, the mother of Achilles, oiled her son with ambrosia and dipped him in fire to make him immortal. Whereas a certain number of classical scholars, among them, prefer to translate the word  as “fragrant”, an interesting, and probably appropriate meaning.

To return to Sant’Agata di Militello: the restaurant is situated a few minutes away from the center of the town, in the hills which rise – following the provincial road SP161 – towards Militello Rosmarino and the Nebrodi mountain chain. It is a red house with a panoramic view towards the coastline and the Tyrrhenian Sea, open to the cool breezes which blow inland off the water.

Franco Agliolo, both owner and chef and – in our case – waiter, sommelier, and maître d’hotel as well, is an experienced man. His passion for the kitchen took him to South Africa and the USA and then, back in Italy, to Massimo Bottura in Modena. Then, shortly afterwards, he opened this small restaurant (30 covers) at Sant’Agata with the firm intention to dedicate himself to the finest raw materials, to the techniques – not necessarily technological or complex –  of transforming them, and to the research into and the rediscovery of the classic dishes of the past, reworked and reinterpreted in a contemporary vein.

The meal which followed was relaxing and enjoyable, the plates quite well made despite the absolute simplicity of the restaurant itself.

Given these premises, we gave maximum liberty to the chef, who chose an “unconventional” sequence of dishes which was right on target. The beginning: a fresh spelt salad with lemon powder: Soft and fragrant and perfectly seasoned with the lemon powder and some bits of cherry tomatoes, the spelt was ideal plate for a summer lunch. It was preceded by a small opener, a dumpling of pieces of lard, bacon, Majorca bread sticks made with natural yeasts, Perciasacchi bread, and sheep and goat cottage cheese, served with a sweet and spicy mustard seasoning.

Then another antipasto, this time a cold dish from times past, Rinisca, served with diced apples, carrots, lemon, and oregano. It is a cold cut, a slice of sheep’s thigh seasoned, traditionally, with fruit – better if figs – and vegetables. A rinisca is a ewe which has not yet given birth to her own young and the dish is made lighter by the lemon, the apple, the julienne strips of carrot, and the oregano. The meat could not be more tender as it is vacuum-cooked at a low temperature.

Next is a veal shin with a cream of Parmesan cheese and a confit of tomatoes which melts like butter due to its long, slow cooking in its own juices followed by a rapid passage in a frying pan to brown it. The Parmesan cheese, though not Sicilian, is a bomb of flavor and pleasure and is refreshed by the tomato confit.

Then a delight for the carnivorous, a plate of lacquered suckling pig with braised red cabbage. The juicy sweetness of the pig, a cut of the black breed of the Nebrodi mountains, was given a perfect touch by the chestnut honey lacquer and a slow browning in the pan and, in addition, by the contrast with the red cabbage, stewed over a slow flame and seasoned with Sichuan pepper, star anise and cloves. A superb offering.

The pasta: the cheese, which evidently remained in the chef’s heart after his sojourn in Modena, returned in the Martelli spaghetti with Parmesan cheese, veal cheek, and squash. A plate so delicious that you want a second helping!

To finish: a frothy Nuage (cloud) of sheep and goat cottage cheese, enriched with by pears, orange zest, and a pistachio wafer.  The essence of Sicily.

To drink: the choice is among seventy different wines, first and foremost those of Nicolas Gatti, the nearest cellar. The prices are extremely reasonable, the five dish menu costs 35 euro, the ten dish menu 50. 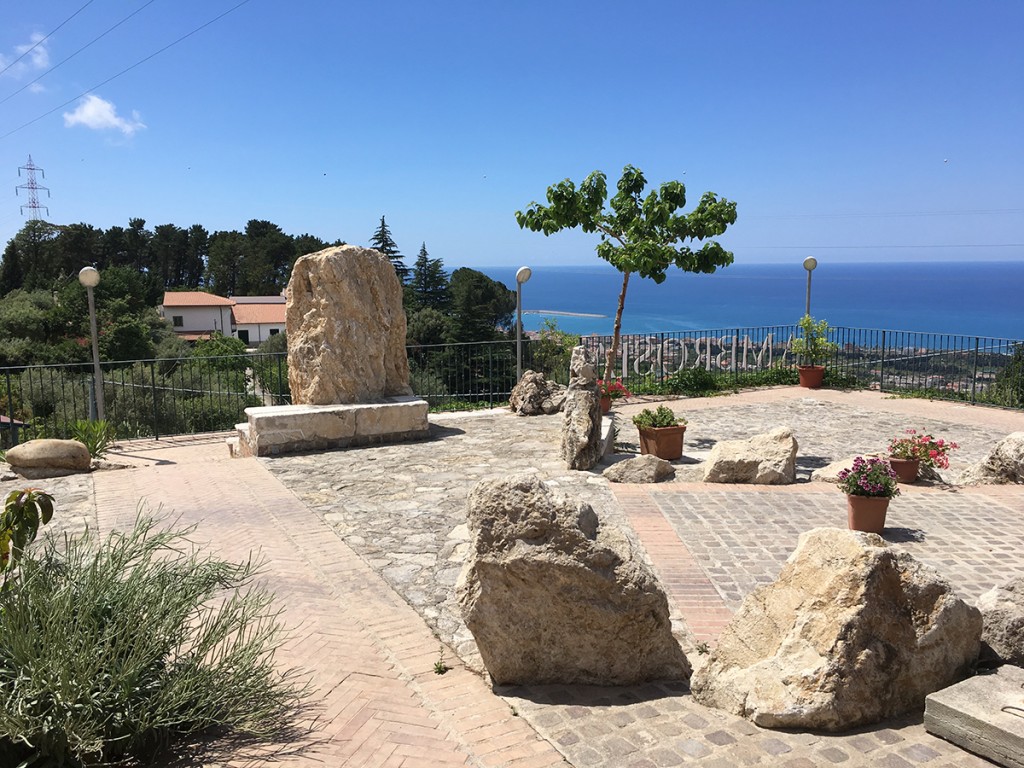 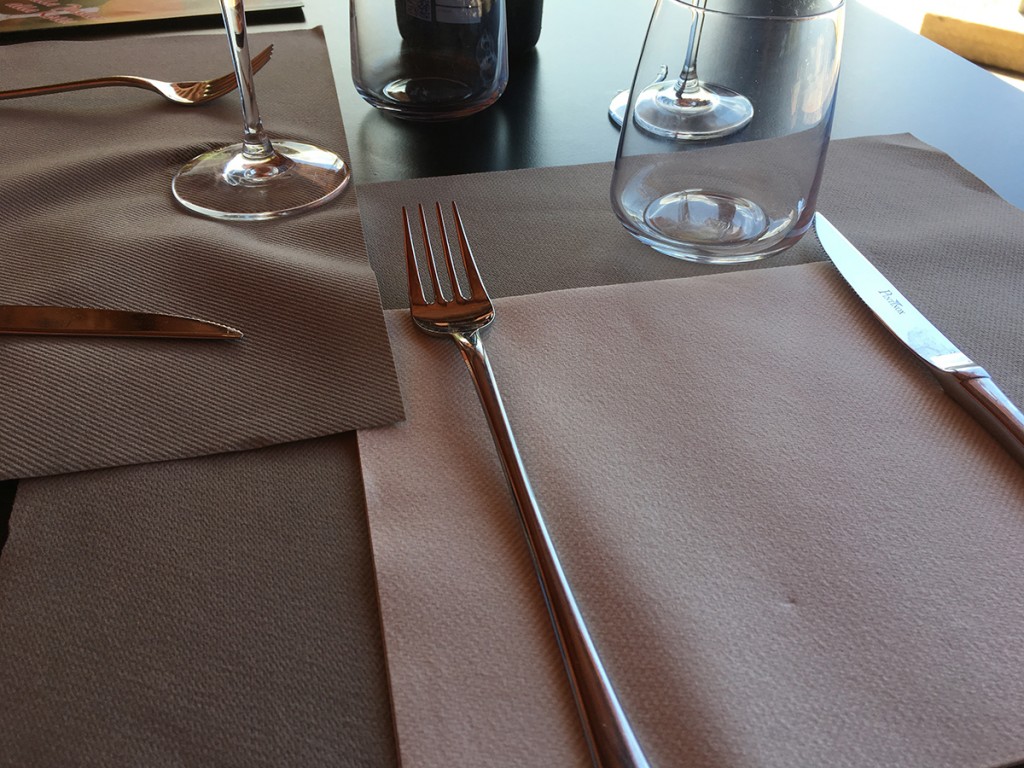 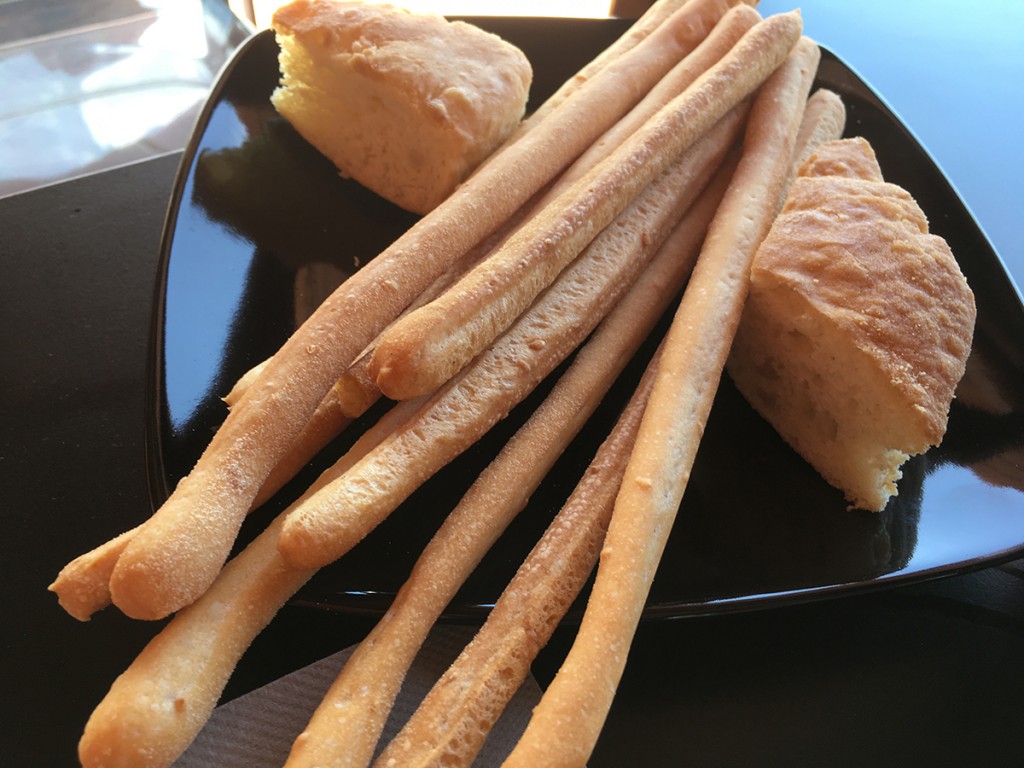 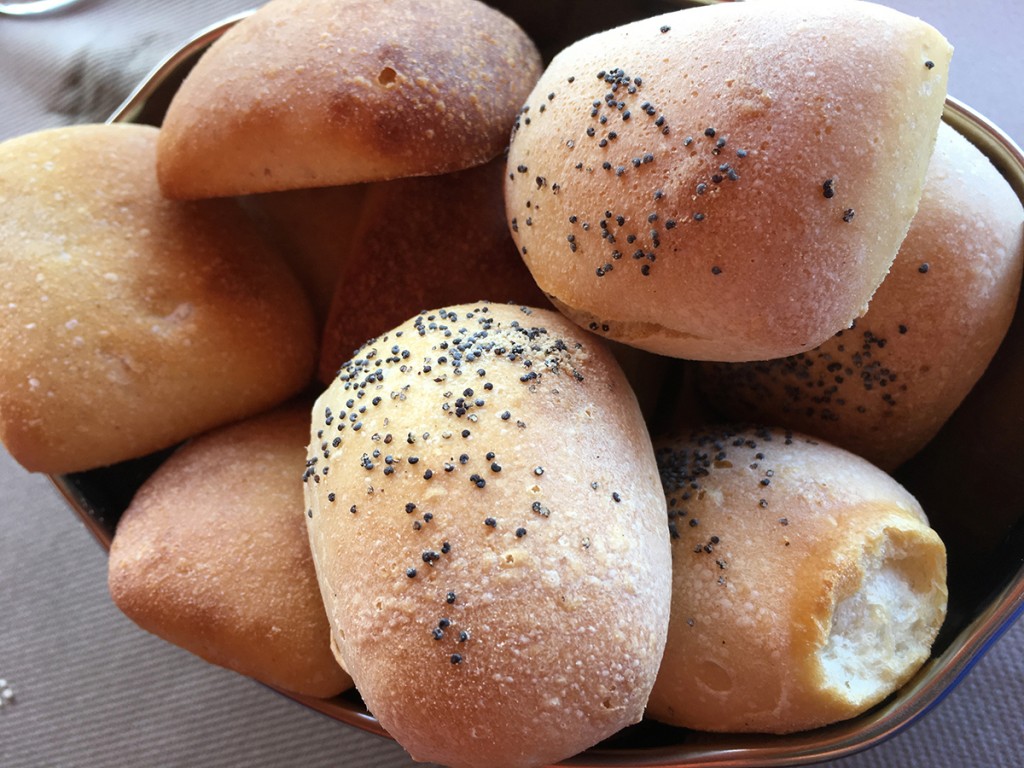 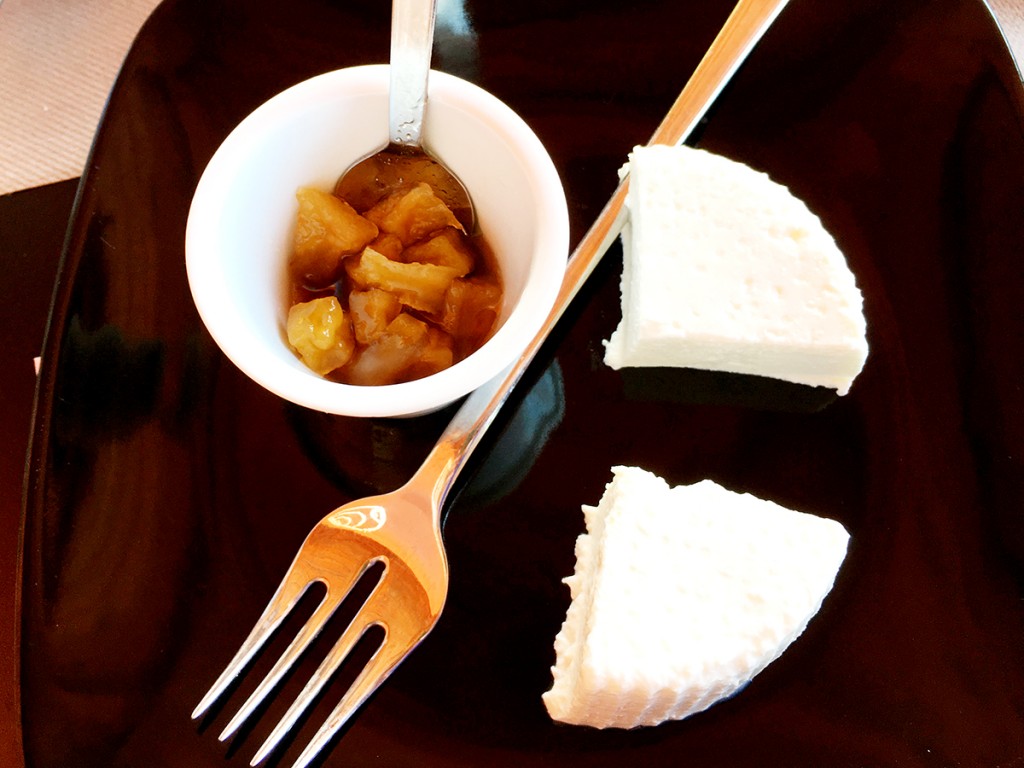 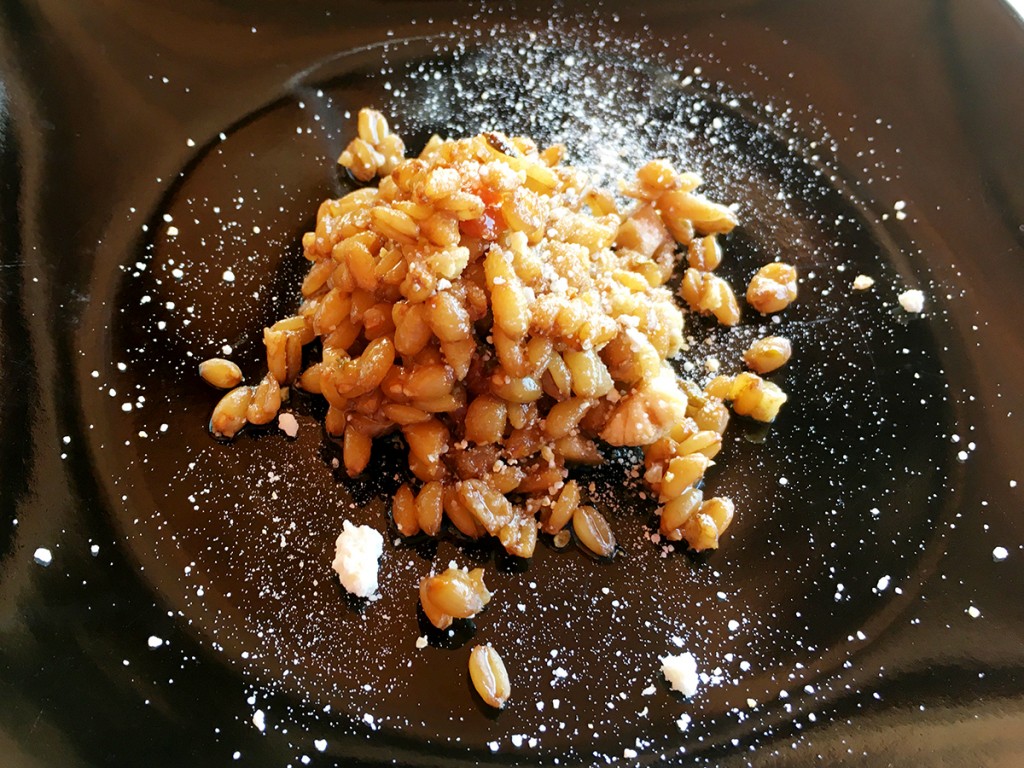 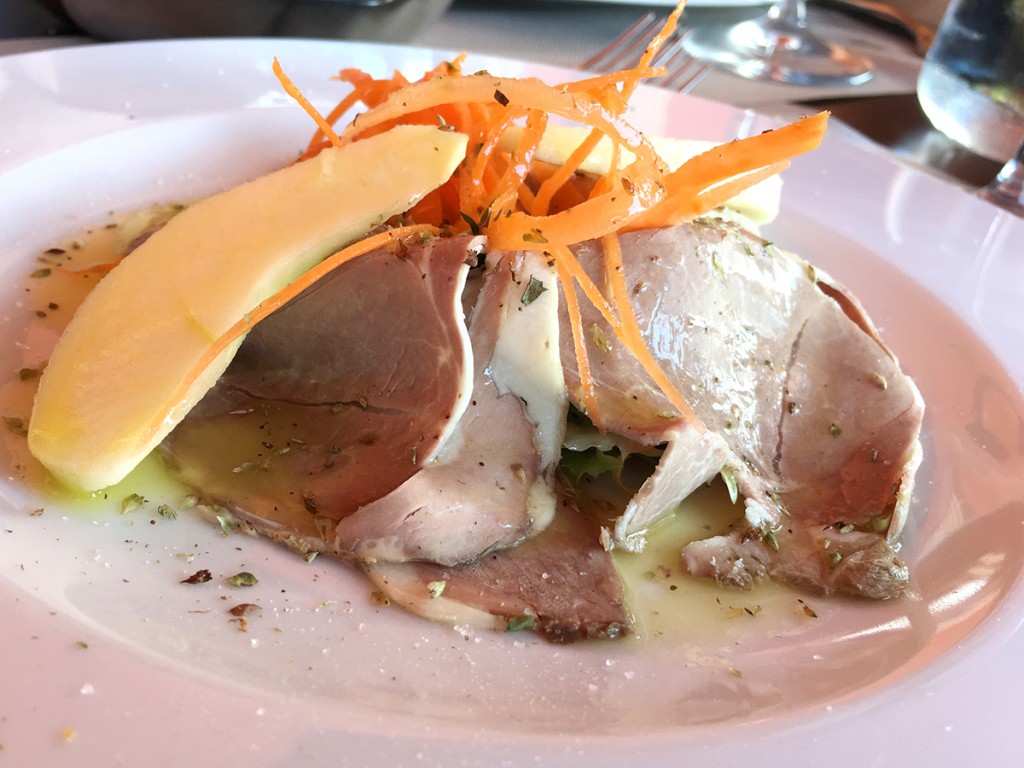 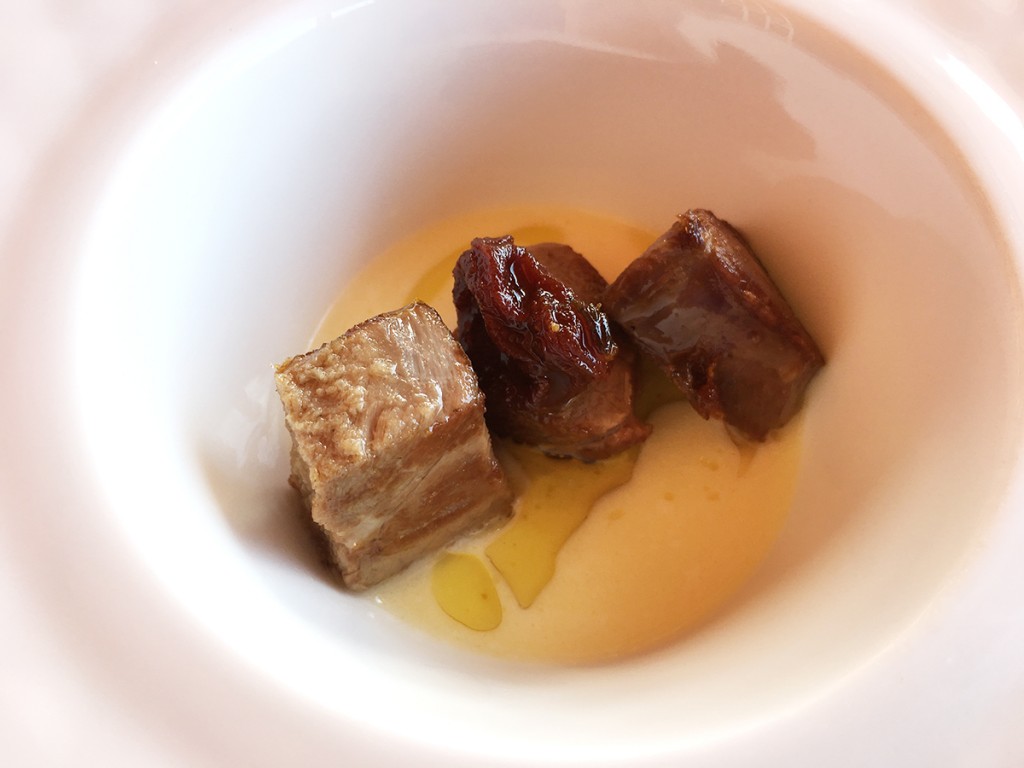 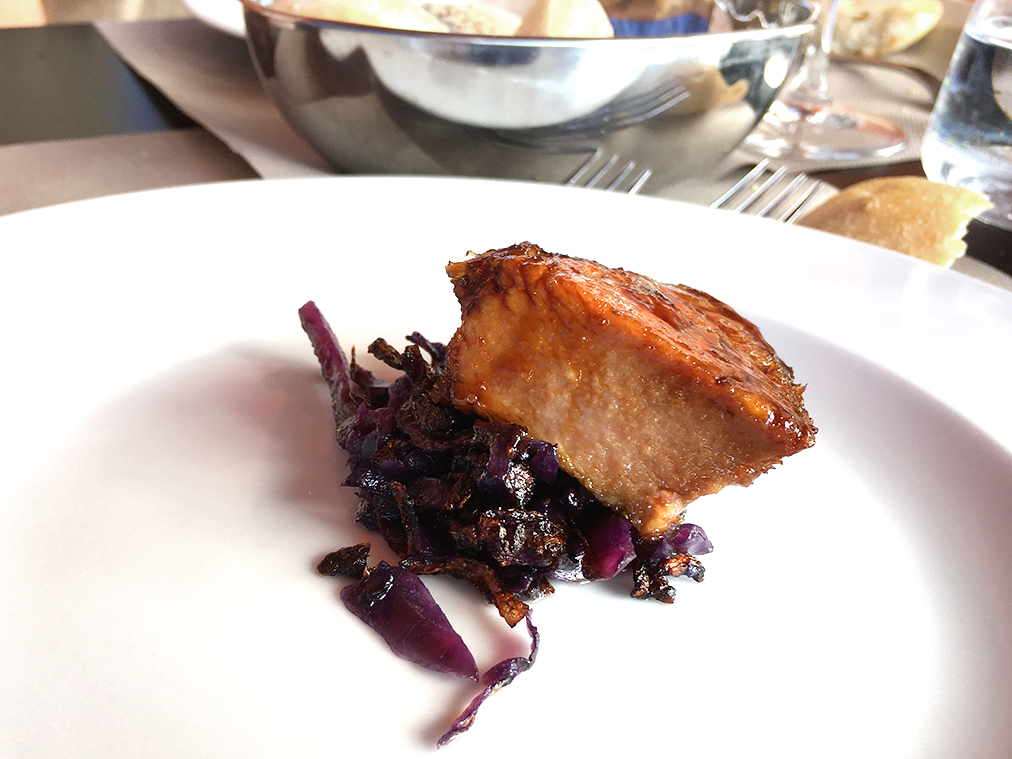 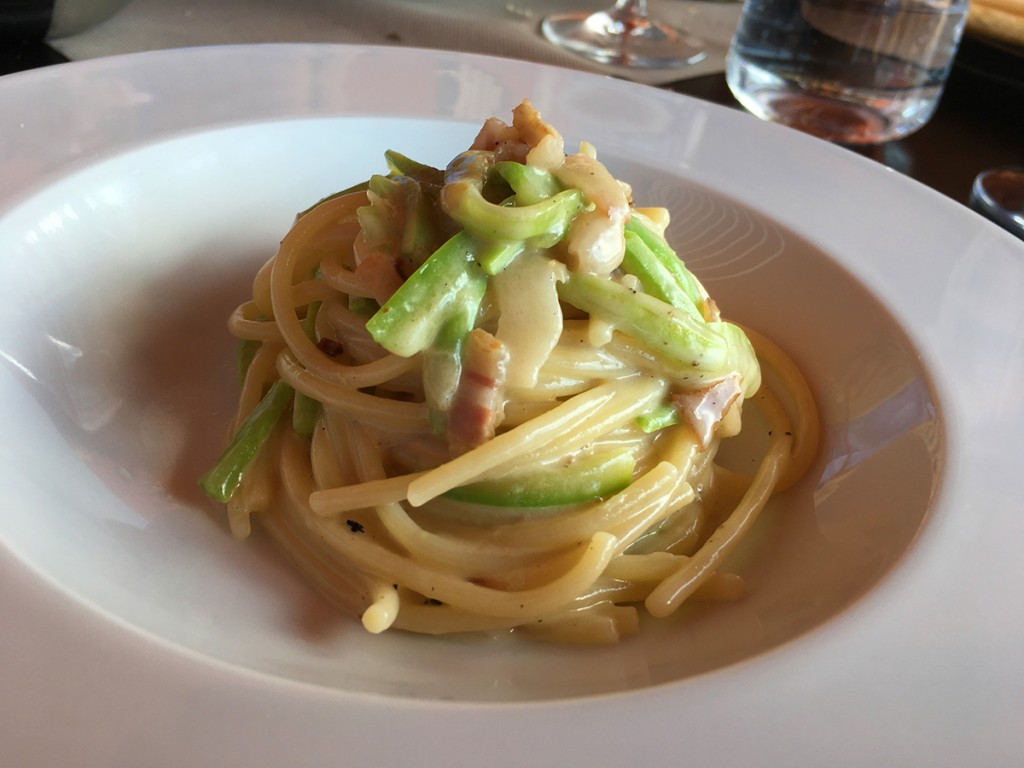 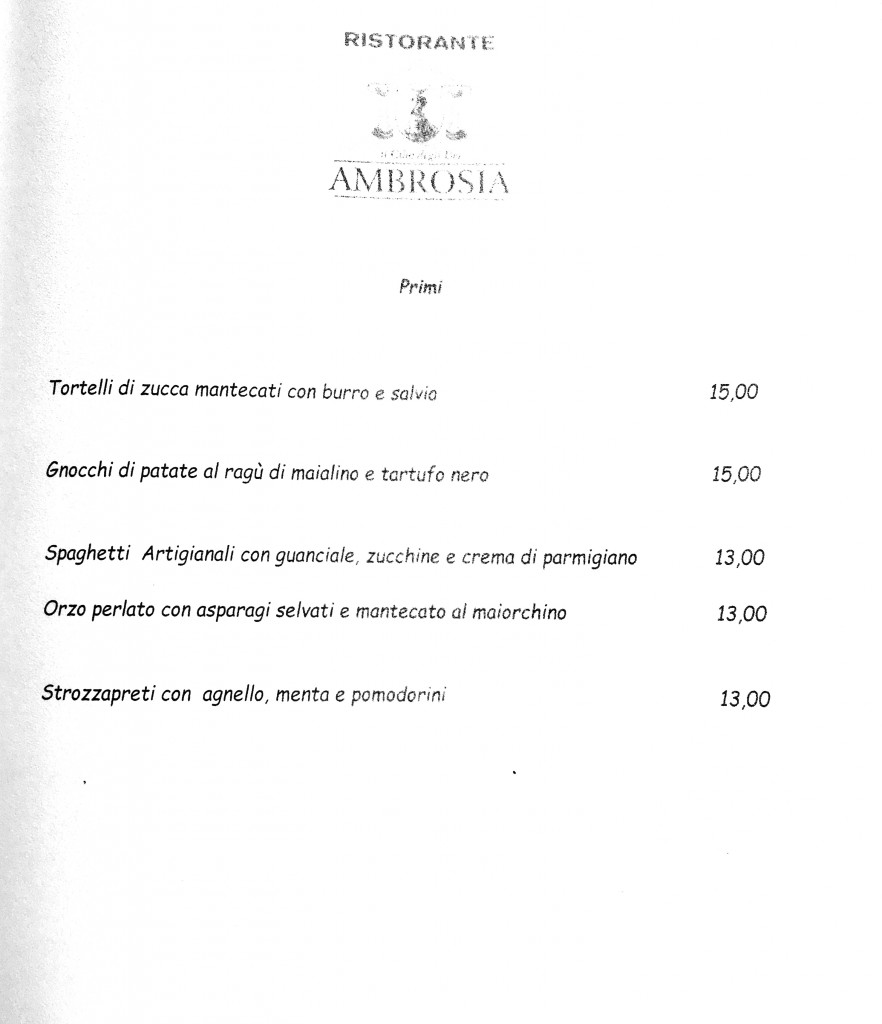 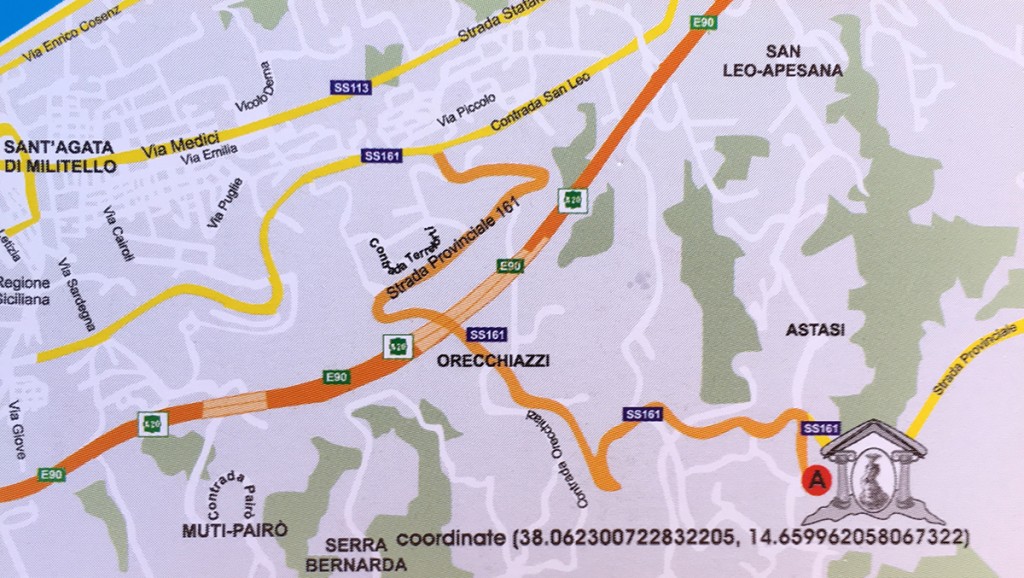 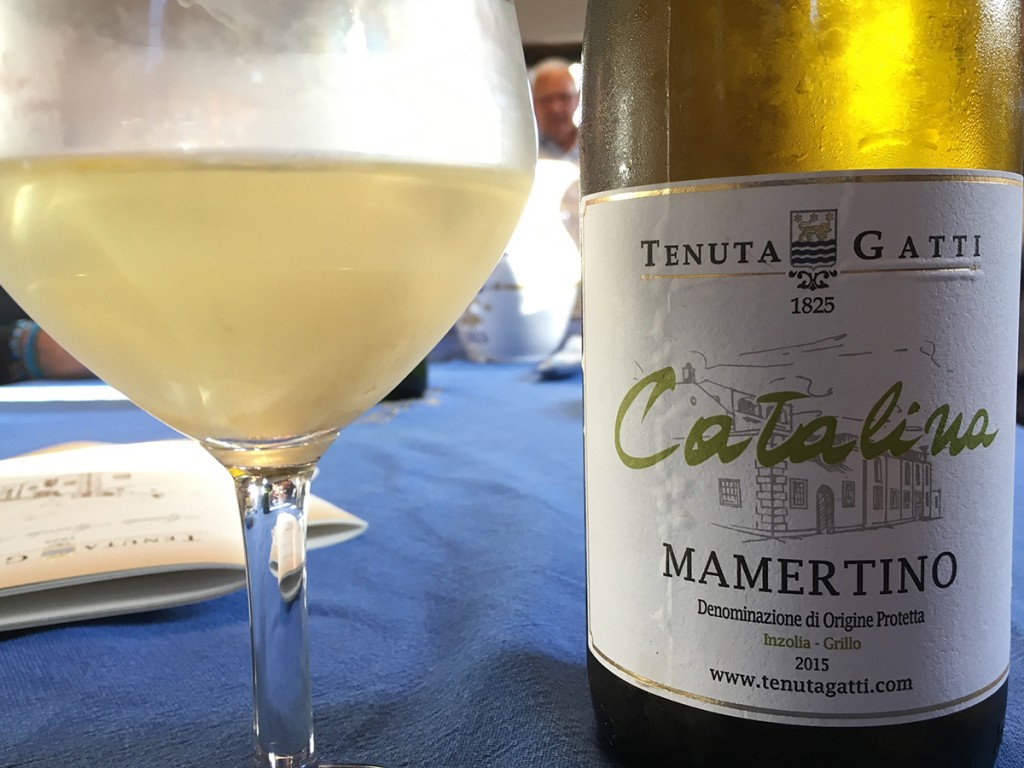 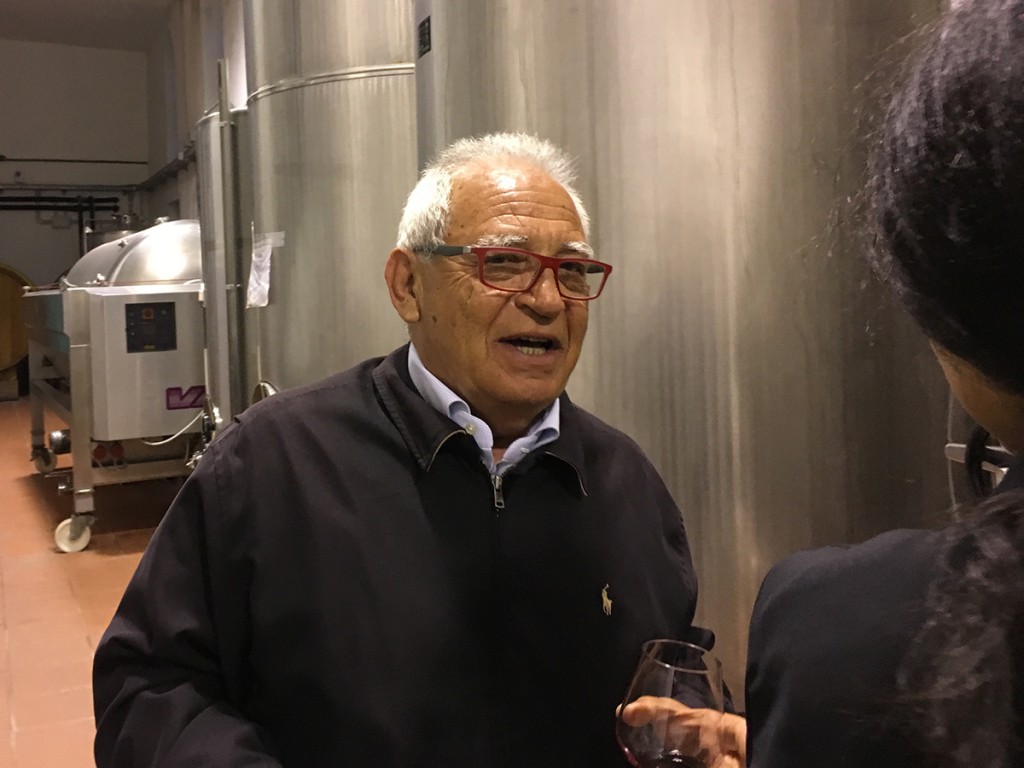 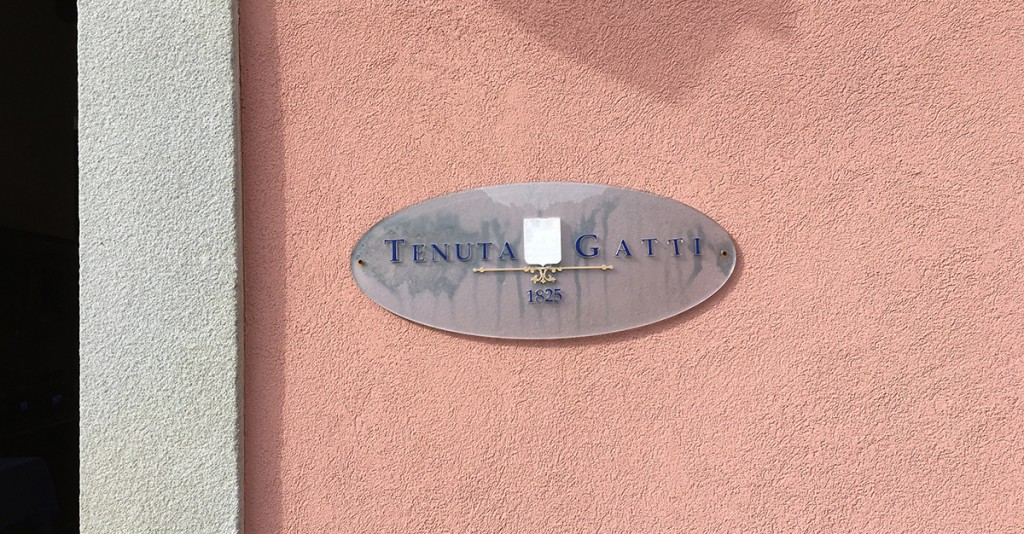 Palermo, extraordinary home, all to live in. Between history and design.