The cuisine of Daniela Cappelli, the perfect hostess of the Quartara Hotel of Panarea, pays tribute to the local produce a tiny island in the Mediterranean is capable of offering. Contrast is a squid salad with black mulberries, wild strawberries and aubergine filled with caponata. A recipe that came about for fun and is closely associated with spring. This, in fact, is the time of year when the islands of the archipelago, following the rigors of the winter, suddenly revive in an explosion of colors, aromas, and fragrances. The squid lovingly counters the sweetness of the fruit in a formidable “contrast” that first strikes the eye and then strikes the palate. The Sicilian touch in this dish, which should be eaten cold, can be seen in the aubergine stuffed with caponata and the presence of fresh, unripe almonds typical of the spring months. 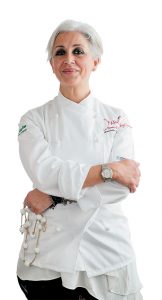 How to make it
Clean the squid thoroughly and boil them for 15 minutes. Let cool, then cut the tentacles into rings about 1 centimeter thick. Cut them in half lengthwise, put everything in a bowl, squeeze over it a lemon, add salt, olive oil, black pepper, and finely chopped chives; let rest a few minutes to absorb the flavors. Take the small aubergines, scoop out the pulp and put them in a bowl of salted water. In a pan, sweat the finely chopped pulp for a few minutes with a little olive oil, the onion, cherry tomatoes, and capers, then set aside. Fry the aubergines, fill them with a little of the already prepared caponata and with the squid tentacles. On a plate, if possible made of glass to represent a lake, arrange on one side the small filled aubergines, tied with a stem of chives. On the other side, spread a tablespoon of wild strawberry jam and place on it the rings of squid, already dressed. Arrange as preferred the wild strawberries and the mulberries, a few fresh almonds and a couple of stems of chives as decoration.

It is an island of spirits where a little too much of everything has accumulated. We need to come to terms with this richness, we have to be able to take it on and know how to use it with good grace.
We have to be able, every time, to create the enchantment.
Why have you come to Sicily? For the enchantment that was promised.

Why have you returned to Sicily? Because I was enchanted.
This book speaks of land, sea, and men, and it speaks of recipes.