The production during 2019 in Sicily counts more or less 4,3 million hectoliters, in the mean values of the last five years. Together with harvest 2014 and 2011, the last harvest has been the third to last in terms of quantity in the last 10 years.

One of the key words that guides the spirit and strategies of Sicilian producers is sustainability and this is demonstrated also by the growing number of wineries that are adhering to voluntary protocols or to certifications linked to sustainability, from SOStain to other certifications, them being Italian and European.

Closely linked to the concept of sustainability is that of biological. Sicily represents today 34% of the biological surface in Italy, followed by Puglia that stands at 16%-17%. In general, in Italy, more than 80 thousand of biological vineyards are cultivated, this number destined to increase. 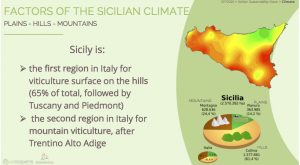 The factors that allow Sicily to have such an approach directed to sustainability and biologic are numerous. First of all, the Mediterranean climate that, among other characteristics, does not suffer from the increase in average temperatures coming from climate change. From the data analyses, in fact, it is noticeable that at the end of June, temperatures in Sicily had similar characteristics to that of the mountain areas, lower than the average European temperature. Moreover, Sicily in 2019 did not suffer increases in temperature with respect to the average values of the last 30years.

From the point of view of the trend of temperatures behavior in the period interested by the cultivation of the vine, from March to October, the temperatures detected show values strongly below the average of the last 15 years and an average raining value quite high with respect of that of the last years but lower than that of 2018. This led to a strong delay in the budding and flowering phase with a scarce fruit set phase generating, as a consequence, very low yields.

Analyzing the different Sicilian areas in 2019, it is possible to detect the different autochthone varieties, those that, smartly adapted to the various terroirs, have been able to exploit at its best, what the vintage was able to provide.

Starting from Western Sicily represented by the provinces of Trapani, Palermo and Agrigento, it is  easy to note that 2019 has been a vintage characterized by a vegetative-productive balance of valuable consideration, even linked to the fact that there have not been interventions coming from African warm winds such as scirocco, but, on the contrary, there have been fresh temperatures that allowed to delay the harvest. This aspect has been very important and had positive influences on the varieties cultivated in that area. Catarratto (or Lucido), was able to lead to wines of high acidity and low ph allowing to enhance the varietal aromas, creating long lasting wines.
With a limited average-per-hectare value this year, Grillo benefited of the same vegetative-productive equilibrium of Catarratto. This allowed for: a development of above the average values of malic acid, the development of many thiol aromas during the fermentative phase with tropical profile, with the final result of very rich and non-too alcoholic wines. At the same manner, Insolia, benefited of the same vegetative-productive equilibrium, generating good aromatic expressions and an acidity way higher that the average. Nero D’Avola, that usually has a very low production per hectare (around 7 tons per hectare in average), was able to ripen very well from a polyphenolic point of view, characteristics that led to a very bodied richness. 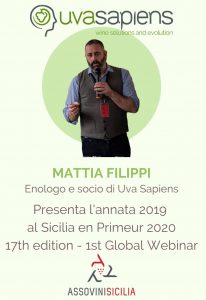 Going to Sub-Eastern Sicily, through the provinces of Ragusa, Siracusa and part of the Caltanissetta area, it is possible to detect that the autumn rains have elongated the harvesting period, especially for the varieties of Nero D’Avola and Frappato.
Going more in depth, Nero D’Avola, was especially able to take advantage of the low productive values per hectare and was able to maintain a lot of freshness and acidity. It is thus likely that these characteristics will lead to wines with an excellent acidity and most likely even a good capability of dealing with time. The same thing happened with Frappato that ripened very slowly, keeping the varietal characteristics, both in traditional and more modern winemaking visions.

Leading to North Eastern Sicily, thus to DOC Mamertino, Faro and Etna, the vintage was extremely balanced with sparks of excellence especially for white grape varieties. The reason behind this stands in the fact that the classical autumn rainfalls happened with a one-month delay time with respect to, for example, the previous year. This situation allowed to harvest way more in terms of quantity and throughout a longer period of time offering winegrowers the possibility of harvesting the grapes at the right moment. The result will lead to excellent wines both from an aromatic and phenolic maturation point of view.
More specifically in the Etna area, Carricante had very balanced aromatic evolutions with a very acidic and vertical profile. As Catarratto, it is highly probable that this vintage will be very positive under the longevity point of view.
Finally, for what concerns Nerello Mascalese, conditions have been truly perfect during harvesting and this allowed the winemakers to exploit at its best the polyphenolic maturation of the variety.