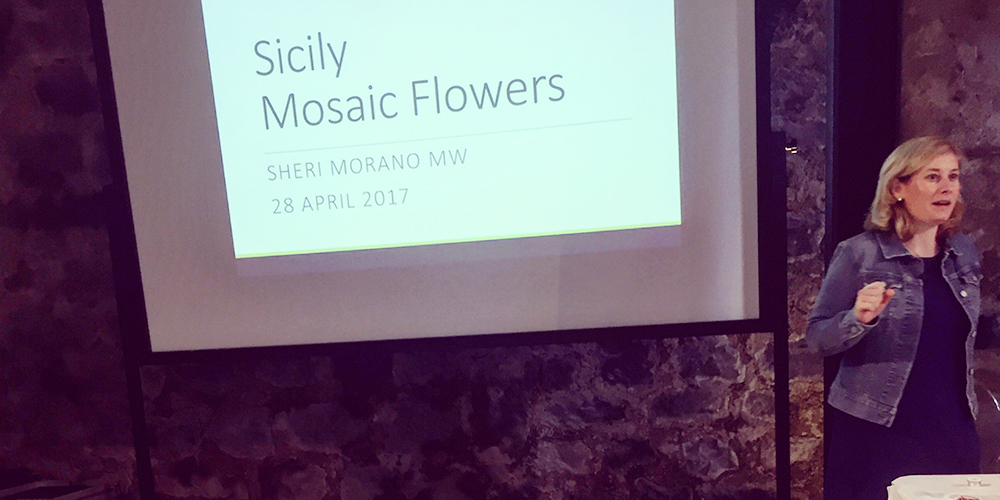 One piece of the puzzle at a time to describe the viticulture of Sicily, this was the idea behind the master class with the evocative name: Mosaic Flowers of Sicily. A mosaic of grape varieties, soils, and micro-climates which makes our island a continent in terms of its vineyards and wines: multi-faceted and with a great diversity. To describe it to us is Sheri Morano, a Master of Wine with a profound knowledge of the American market, one of the most complex and most interesting from the export point of view for Sicily. To tell the truth, the USA is not one sole market, the dynamics and the differences of legislation from one state to another force producers to choose with great care their importer, a figure of central importance for maneuvering in the labyrinthine and competitive American market. Morano’s account, in any case, is more than positive: Sicilian wine is on the upswing, well thought of and well known.  There is great interest, in any case, in the wines of Mount Etna: the title “Burgundy of the Mediterranean” pleases and convinces the public, which found confirmed  by what they tasted in the glass the enthusiastic headlines from the wine press and  from the New York Times, which dedicated several pages to the Mount Etna and to the wines of  the producers on the volcano. The Master of Wine then insists on the perception of Italian wine and defines them as a “comfortable category”: the names which are easier to pronounce and the sympathy felt towards our country make them more attractive to American consumers compared to those of Germany and France. In addition, Italian wine is more “food friendly” and an excellent match to various kinds of dishes as well. A rosy picture, that which is traced by Sheri Morano, who insists however on the necessity of introducing the concept of the diversity of Sicilian wine: consumers need to understand how the same grape variety , planted in different zones at times only a few hundred yards from one another, can gives such different wines. Let’s taste them!

Mandrarossa, Grecanico 2016
We are in western Sicily, and here the grape gives us pleasurable surprises: it is fresh and floral. There are attractive notes of citric fruit on the nose and little residual sugar in the flavors. Characteristics which make it perfect with fish or with light cheeses.

Baglio di Pianetto, Insolia – Natyr 2013
An orange wine without added SO², fermented on its skins and marketed after two years of aging on its lees. Insolia is a native grape variety  which expresses itself with a strong personal identity. It can please or not please, as is often the case with natural wines, but this is a wine which will be discussed.

Valle dell’Acate, Frappato 2016
The history of this grape is not clear, what is clear instead is that this fresh and vibrant wine goes perfectly with fish, despite being a red wine. It is, in fact, a seafood-friendly offering, just as Morano defines it. Red fruit on the nose and a juiciness which emerges on the palate.

Terre di Giurfo, Maskaria 2013
Another Cerasuolo di Vittoria, but with different percentages in the blend, 40% Frappato and 60% Nero d’Avola. A fine balance, which gives smoky and liquorice notes to the nose. More tannic on the palate than the previous wine, but nonetheless fresh, the notes of raspberries and blackberries give it vigor.

Tenuta Gatti, Nocera – Sicè 2012
A very interesting native Sicilian grape produced in the Messina area. Peppery on the nose and  piquant on the palate, softened by a delicious smoky note. The tannins are pleasurably astringent and, as Morano states, this is a wine with grip.

Le Casematte, Doc Faro 2015
A blend of native grapes: Nerello Mascalese, Nerello Cappuccio, Nero d’Avola, and Nocera. A mosaic in itself! A fascinating freshness. On the nose, a note which recalls pine smoke: herbaceous but warm at the same time. The tannins are severe, but this is a wine of great personality.

Caruso e Minini, Sachia Perricone 2015
A long and important story belongs to the Perricone grape of western Sicily. In the wine we feel the acidity and, at the same time, the sweetness of black mulberries; on the nose the notes of liquorice and dark chocolate. Round tannins in an elegant wine.

Tasca d’Almerita, Rosso del Conte 2013
A wine first made in 1970 with a certain ambition: that of demonstrating that Sicilian red wine could age. A part of the history of the island’s wines which has evolved over the years, giving us constant new surprises. Very attractive the notes of liquorice and mint. Elegant and balanced, a classic. “That’s all”.

Marchesi di San Giuliano, Il Pastore 2014
Merlot and Nero d’Avola, international and autochthonous. More incisive on the palate than what is suggested on the nose. The Merlot offers a pleasurable note of black pepper, while the body and the structure are from Nero d’Avola. An intriguing wine.

Vinding Montecarrubbo, Montecarrubbo Cuveé Suzanne
A grape which, among the international varieties, is also the most Sicilian. This wine, fermented with spontaneous yeasts, is a blend of grapes from vineyards with two different soils: Vigna Noto is calcareous, Vigna Melilla is volcanic. One terroir together with a different one, which makes this Sicilian red wine a fascinating offering with an international character. 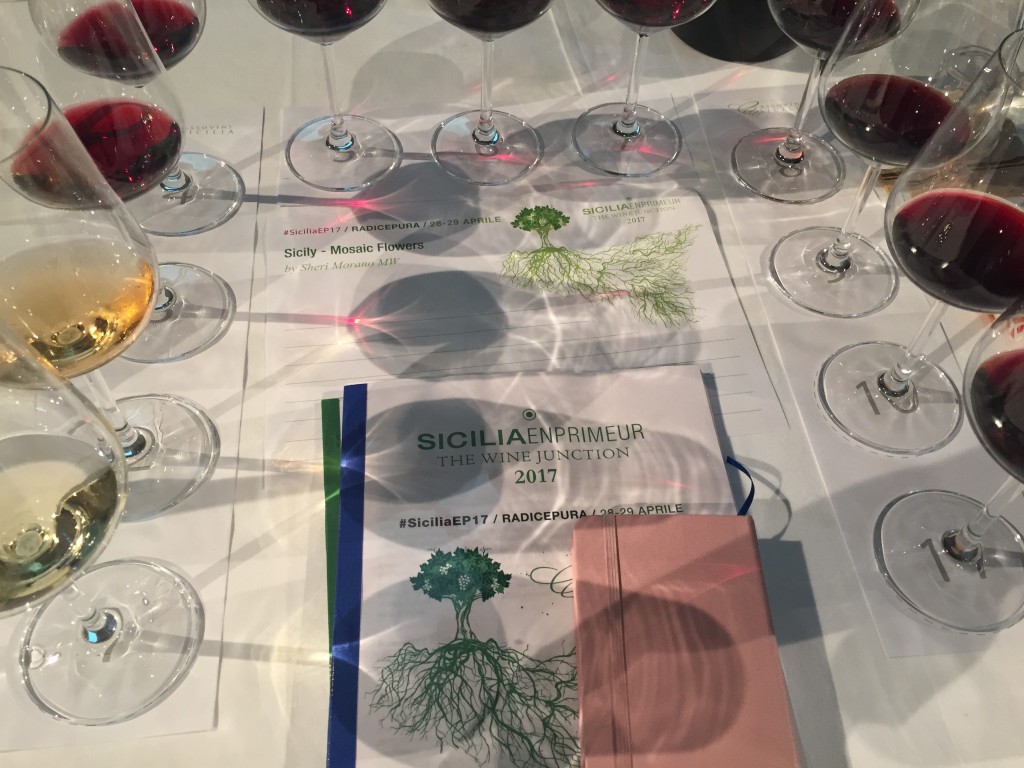 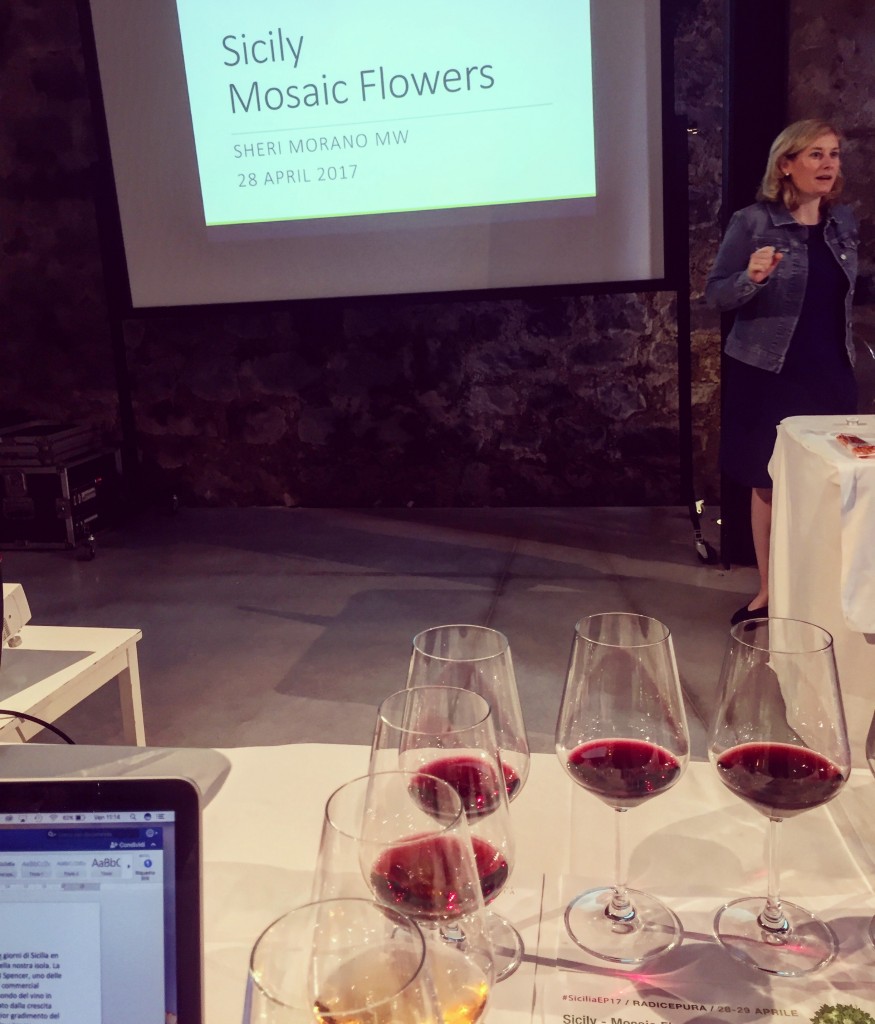 Etna, a masterclass with Master of Wine Jeremy Cukierman